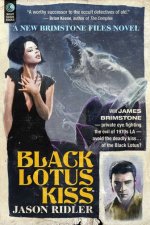 As far as mystery novels go, BLACK LOTUS KISS hits all the marks: character, location, and plot. It doesn’t try to be more than necessary: an over-the-top Hell’s Angels is in league with an eldritch deity-controlled Girl Scouts cookie drive style of mayhem. It is inane, irreverent, and utterly unapologetic in its absurdity.

In a lot of ways, the novel feels less like a homage and more like a lost treasure from the time period. At its core, the novel follows an absurd premise: an ancient Babylonian war drug that turns its victims into psychos and nymphomaniacs is spreading across Los Angeles.

To be frank, the novel is sleazy, lurid, and straight up crass. Modern readers might find Brimstone’s narration off-putting or offensive. They shouldn’t, though. What Jason Ridler has done isn’t just craft a cheap pastiche of the occult detective pulps of the 1970s. Like Raymond Chandler’s Phillip Marlowe mysteries, Brimstone’s life intersects and reflects the time period of the early 1970s.

Every street feels like a sun-stained tan, every crisp but effective description reinforces the sunny dream of LA, only to see its ugly underside as Brimstone crosses between both worlds. There are crooked cops, lonely housewives, neurotic drug-dealers, creepy demons, and a whole cast of classic but stock characters with enough charm to rise above their grindhouse origins.

The thing I love most about this novel is how aware it is of its roots. Rather than try to deconstruct it, Ridler weaves a yarn that plays it deliciously straight. It doesn’t turn into a meta story or possess some needless second act plot twist. It’s just another case for Brimstone, and another struggle to live and die in LA. It’s fun. It’s fast paced. And it’s a hell of a ride to just embrace the absurdity of a bygone genre with one last BLACK LOTUS KISS.

Definitely check this out.