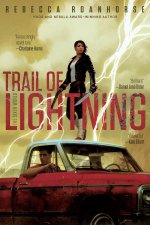 I’m a sucker for the just slightly off-kilter world. The ones where the setting simultaneously feels like a very possible future but also brings in the mythical and magical. I love a good post-apocalyptic, monster-killing, magic wielding story. And sign me up for anything with a hint of romance.

All this is just a very long lead in to say that TRAIL OF LIGHTNING (Amazon) checked A LOT of boxes for me.

I’m not the only one who enjoyed Rebecca Roanhorse’s debut novel. Actually, I think I’m a little late to the party, considering that TRAIL OF LIGHTNING was a finalist for and/or won Hugo/Nebula/World Fantasy/Locus awards. Yeah, that’s a lot.

But no matter how many awards a novel has, or hasn’t won, it doesn’t necessarily mean it’s the book for you. I guess you’ll just have to keep reading this review to find out?

Maggie’s ability to kill is in her blood. Literally, as her powers come through her bloodline. When a terrifying murder caused Maggie’s nascent powers to bloom, she was rescued from the horror by Neizghání, an immortal and Monster Slayer. She became his pupil–almost his disciple. This arrangement works for years until Maggie does something [no spoilers!] so terrible that even her teacher rejects her, vanishing from her life.

Months later, and Maggie’s hardly talked with anyone, or even left her home, other than simple exchanges to trade for her services as a killer. When the Big Water came, ushering in the Sixth World, it brought back the immortals, the tricksters and protectors. It brought good, and plenty of evil. Maggie will have plenty of work, if she chooses.

On one of her rare excursions out, Maggie encounters a monster of a type that she’s never seen before. Hoping for some insight, she visits her surrogate grandfather, Tah. Tah assists her, but he also suggests she take his nephew Kai for a ride-along as she continues her investigation. You know, just to see if he could be helpful. The slick, quick-talking, perfectly coiffed Kai is more than Maggie can take, but he proves quickly that Maggie’s not the only one with good instincts, and as they follow the trail of bodies and monsters back to its beginning, Maggie and Kai will need each other to survive.

I really liked Maggie. The trauma of Maggie’s distant past combined with the recent crushing rejection of Neizghání drive her towards the monsters and away from people. Watching Maggie wrestle between a sense of her own worthlessness and her desire to be loved (even by the wrong people) is compelling.

With a strong character voice and a taut narrative, TRAIL OF LIGHTNING is a strong debut with engaging characters and a fascinating near-future setting.

Maggie has a strong voice and tight focus on her POV keeps the narrative taut. The story and plot, despite there being more than one shootout, is tied closely to Maggie’s questions and desires. Even though we don’t have another POV, Roanhorse does a nice job of using Kai as a foil for Maggie, allowing the reader to see her and her decisions from a different perspective.

One of the elements that made TRAIL OF LIGHTNING stand out for me was the immediacy of the writing and the close fit of the prose to the character. Roanhorses’ prose is simple but carries a real heft to it. It’s attentive to details — a man’s hands, rising smoke, the weight of the silence before a monstrous presence makes itself known.

The style of the prose eschews simile in favor of metaphor. Things are as they seem, even when they seem too monstrous or mythical to be believed. Roanhorse writes in short, straightforward sentences, which carries a cadence that seems to match the taciturn, pragmatic Maggie.

TRAIL OF LIGHTNING is a strong debut with engaging characters and a fascinating near-future setting.