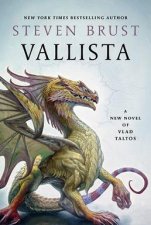 VALLISTA is a weird story, and Vlad Taltos, Steven Brust’s long running, on-the-run ex-gangster fantasy series, embodies the series’ increasing strangeness. The novel focuses predominantly on everyone’s favorite time and worlds-travelling stealth hi-byer, Devera. While Devara drags her Uncle Vlad into a search to help her escape her predicament (it makes sense as you read), Vlad soon finds himself in a strange manor where rooms lead nowhere, the patrons and denizens are a lot of miserable secrets and wretched histories, and a monster stalks the halls. The House itself, which is alive and delightfully a character with its own soul and history, takes the center stage.

Essentially, VALLISTA is the plot of Clue mixed with the living house of Crimson Peak, and Vlad destroys the plot with his usual smart-aleckiness, and general thuggery. Or better yet, it’s an affectionate send-up of Then There Were None in which Vlad solves the mystery of U.N. Owen and then blows up the house with another “and then I found myself staring down a dragon, but you know me” with a wink and a sly smile.

There’s a solid amount of character development for Vlad, and some surprising glimpses into his past, along with the usual flashbacks interlaced in each novel. While Devera plays a central role, as she needs Vlad to help her escape the house, there’s still very little revealed about her, given this novel takes place before the events of HAWK.

I make no secret that I’m a fan of Brust, considering his simple idea of a renegade mobster in a cutthroat fantasy empire was genius back in the 1980s. But Vlad’s old habits and charms are starting to show their age. Since the novel takes place right before the seminal HAWK, which is an amazing caper and readers should go read it; yes, there’s less of a thrilling game or sense of excitement in the impossible, and convoluted, schemes Vlad tends to concoct.

A sentient house, mystery archetypes, and mobsters in a cutthroat fantasy empire makes VALLISTA a fun read, if not necessarily an instant classic.

The House is interesting, the core characters are whimsical takes on closed room, or Agatha Christie mystery archetypes–clichés really–but other than Brust’s playing with classic mystery themes, there’s little here. In a sense, this is a fine, little side story that develops Vlad and Devera right before the events of HAWK, but does little to stand on its own. Which is a shame because other than the somewhat deflated plot, Brust is on top with his spitfire dialogue and competent characterization of a lot of strange strangers.

Still worth a read, but not necessarily a bookshelf slot. Give it a go.

Check out our interview with Steven Brust here.