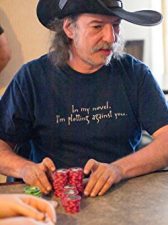 EBR: Who is Steven Brust, in that “Inside the Actors’ Studio” way, and tell us a little bit about yourself? What would people enjoy about your novels, besides the true crime story in an epic fantasy novel series you’ve had running for a few decades?

Steven Brust: You ask hard questions for someone raised to believe that one doesn’t talk about one’s self. I do need to rewatch some “Inside the Actors’ Studio” though, thanks for reminding me. In the meantime, I’m not sure how to answer that. Born in Minnesota, I’ve lived here most of my life. I was raised by proletarian revolutionists, and still consider myself Trotskyist sympathizer. I also consider myself extraordinarily fortunate to be able to make a living doing what I love, not just in the sense of writing fantastical fiction, but that (so far) I’ve been able to survive writing the next book I want to read. The next book I want to read usually has a fair bit of wit, some action, characters that I want to follow around to see what they do next, and enough “chewy bits” ((tm) Emma Bull) to reward rereading.

EBR: You’ve written in almost every fantasy genre to date, in both the short form and the long form. What is it about fantasy that really speaks to you, draws you in?

Steven Brust: Fantasy, more than any other field except erotica, is tailor-made for wish fulfillment. Everything from, “I wish I could snap my fingers and visit my friend who lives across the country,” to, “I wish I were the sort of person who would inspire [respect/love/admiration/whatever].” One of my favorite ways to play is to start out with wish fulfillment and then examine consequences. The wish fulfillment pulls me in, the examination of consequences leaves me stuff to chew over. I deeply love a book that I can read in three hours and talk about for three weeks. Wish fulfillment plus consequences lends itself to that.

EBR: You’ve maintained “Your Cool Stuff” theory as a guiding writing principle for years, which is refreshing because a classic honor duel with a rapier and parrying dagger is right up my alley. As a writer, do you feel when you’re writing for yourself it potentially brings out your best? Like a mixtape no one will ever hear because only you think it’s cool?

Steven Brust: I love the mixtape example, well done. Those books are my mixtapes, and it is amazing that there are other people out there who actually look forward to hearing my next mixtape. However, I’ll nitpick a little with the “writing for myself” thing. That isn’t exactly it. I’m writing for some imaginary reader out there who just happens to love all the same things I do. The difference between that and writing for myself has to do with passages that may be fun to write, but wouldn’t be fun to read. One must be aware of those. The “slaughter your darlings” advice is way overused and can easily be taken too far, but it does have its place.

EBR: GOOD GUYS came out last month. To me, it proves you can still make something focused within the landscape of urban fantasy. It’s mages versus mages. It feels less like secret societies trying to control the world, and more like the FBI and the CIA competing against each other in typical red tape issues and grinding bureaucracies. How did you set about creating the story initially?

Steven Brust: Honestly? I wrote the first scene, pretty much exactly as it appears, in first person, and then, I don’t know why, suddenly wanted to switch to third for the next scene. Then Donovan showed up. I don’t where he came from, I’d never met him before, but he’s one of those characters who just appears, like a drop of sweat from Zeus’s brow, and says, “here I am. I’ll take over now.” After that, I just let it run. I learned about the world mostly by watching him live in it. Of course, that was a first draft, and like always happens when I just fire off a first draft, it took intense revision: I had to examine the whole thing and make sure it made sense, at least to me, and then make it look like the whole thing was planned from the start. Critique groups and smart friends helped a lot.

EBR: I’m huge fan of old school noir. Chandler. MacDonald. Hammett. All the other masters and mistresses of the hardboiled days long gone. To me, GOOD GUYS immediately evokes that style, but it strips away the glamor and the romanticization of the sub-genre. Dom, Susan, and the others work for minimum wage, despite the dangers they face on a daily basis. Did you intend this from the start, or did you develop the working class angle naturally as you wrote the novel?

Steven Brust: Yeah, that happened right away, and, I know this is no excuse, but the simple fact is, when Donovan appeared, he appeared in his little apartment, with paperwork from his other job (typing medical records) sitting around, and he just told me that’s how it was. That was one of those delightful writing experiences where you start with a conclusion (they’re paid minimum wage) and then backtrack to find the reason (the whole structure and nature of the Spanish Foundation), and then discover that, somehow, it not only all make sense, but it even fits together and works with your plot, and you go, “I don’t know how this happened, but, uh, thanks Donovan.” Trotsky referred to inspiration as the creative unity of the conscious and the unconscious, and I think that pretty well describes that, and in a sense means I can’t entirely say how it came about. Inspiration does not produce work that is either better or worse, in general, than what I construct, but it sure is more fun.

EBR: The thing I really enjoyed about the story was how it wasn’t about saving the world. It was an important case, but given the beginning and ending of the novel, you get the impression their struggles will go on, despite the novel’s outcome. It’s intimate, as opposed to world-shattering. Did you do this on purpose or was it, again, something that came about through the writing process?

Steven Brust: Mostly the latter, but I also have a weakness for exactly that. Do you know The Night Watch by Rembrandt. Go look at it. It seems important, doesn’t it? That’s because it is important–to everyone in the painting world. I love that kind of intimacy, because to me it goes with intensity, and who doesn’t crave intensity? That said, however, I keep finding myself with stories that I wanted to be intimate, but then keep expanding and growing on me and taking on wider importance than I’d thought they’d have–that’s exactly what happened with my first novel, Jhereg. And it keeps happening. So I’m glad this one was able to stay, as it were, small.

EBR: Will there be a sequel? I know it’s a “standalone”, but I loved the world. Especially, the way you created the organizations and the setting’s history suggest other teams and other cases could appear, even if you don’t return to Dom and his team. Would you consider returning to it, and if so, what would you do?

Steven Brust: I don’t know. I really like Donovan, so I could well get that itch to know what he’s up to, the way I keep getting with Vlad, but I might not.

EBR: With GOOD GUYS done, is there any new idea on the horizon you’re looking to tackle? A scrapped story from a decade ago? Some concept so off the wall, it even surprises you?

Steven Brust: None that I’m aware of, but I’m open to something hitting me if it does.

EBR: Off topic, but was there a Devera cameo in this novel? I feel like she was a background character at some point in it.

Steven Brust: Yes there was. 🙂

EBR: Any last words of wisdom, cynical sayings for our readers?

Steven Brust: Just a thanks; I enjoy interviews that make me think, and you did that.

EBR: No, thank you, Steven, for taking the time out of your day to be here with us!

This interview was conducted for Elitist Book Reviews by Allan Bishop.