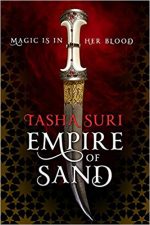 There is magic in those storms, and Mehr can hear it calling in her blood. When she inadvertently uses that magic for the first time, she attracts the attention of the Maha, who sends a delegation of mystics–among them a new husband.

EMPIRE OF SAND grabbed my attention at first because it’s set in a land and era similar to that of the Mughal Empire of India founded over 500 years ago, with the magic and religion loosely based on that same era. It sounded unique and interesting. However, the first few chapters are infodumpy and the forced marriage felt like a cliché, which I admit totally annoyed me–but the setting kept me going despite these issues. And fortunately it did because the plot finally starts to take off around the 25% mark and I got sucked in not only by the setting, but also by the story and the characters.

Mehr's heritage makes her an outcast in her father's court. That same heritage brings her the power to save the people from a tyrant in EMPIRE OF SAND.

Mehr is our main PoV character (with a few secondary character PoVs thrown in to make plot points less contrived). She’s young (17 or 18 I think), strong-willed, clever, and loyal. She’s willing to sacrifice herself for the sake of those she loves, even though it means marrying a man she doesn’t know and becoming a subject of the mysterious Maha. Her characterization felt a little inconsistent at times, and there’s more internal monologue than I like to read, but on the whole she was interesting and it worked with the story. Another important main character, Amun, I quite liked and it was interesting to see his story as it unfolded. Mehr so much wants to be a good person and Amun equally wants to do the right thing–which is hard considering their circumstances. The story’s themes of choices, heritage, and love is what drives the characters. Other characters were secondary and less developed, even the villainous Maha, who could have been more rounded, but there simply wasn’t time. But it’s not the characterization that shines here: it’s the story and worldbuilding.

Like I said earlier, the story takes a while to get going, and Suri builds the reader’s knowledge as she goes. After the initial light infodumpiness in the first couple chapters, she does much better later by breadcrumbing culture, magic, and history within the story itself. The magic is so different and how it drives the story is compelling and clever. There’s so much to discuss and explain about the magic but I don’t dare discuss anything here because it will spoil the story for you. And it’s that sense of realization, interconnectedness, and dismay that will propel you through the story as you wonder how in the world Mehr and Amun will ever overcome their horrible situation. I could feel how much Suri loves her subject and wanted to stay true to the feel of a race and culture without bludgeoning us over the head with it.

EMPIRE OF SAND isn’t a perfect book, but I don’t care. Suri is a little too fond of adverbs and there are other stylistic issues that could have been smoothed out, but that’s my personal preference. She uses clichés, but to great effect so they feel less like clichés and more like integral points in the story. The characterization could have been deeper. But these issues are easy to overlook because EMPIRE OF SAND is an enjoyable and clever read.