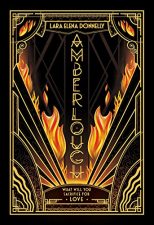 AMBERLOUGH is the kind of novel that makes you want to throw adjectives at it. Sleek! Provocative! Captivating! This is due in large part to Lara Elena Donnelly’s prose, which gives the alternate world setting an immediate and richly textured sense of place. AMBERLOUGH (Amazon) is a remarkably self-assured debut, as Donnelly carves an unique space for herself in the fantasy world.

While the setting–the troubled confederacy of Gedda–may be fantastical, the reader will immediately recognize the characters’ lifestyles and the looming threat of fascism as highly reminiscent of the 1930s. However, this is no alternate history. Amberlough as a city does not (thankfully) map onto New York or London or Paris. Instead, the city itself is the first character we meet, as its high-living, free-wheeling, pocket-padding denizens drag themselves onto the trolley system for another day of work. It’s important that we get a feel for the city right away–the busy port, the busier district of thespians and pleasure houses, the stately gardens and monuments–because the fall of Amberlough is the crux on which our characters’ lives turn.

Cyril DePaul is one such protagonist, a spy still recuperating after a mission that left him with physical and psychological scarring. His current assignment is to shut down a big player in the Amberlough black market. However, with increasing political pressure from the Ospies, the fascist group pressing for a united Gedda, it’s getting difficult to obtain international goods and Cyril isn’t sure that he wants to be the one to stop the flow.

It certainly doesn’t help that Cyril is sleeping with the head of the smuggling operation he’s supposed to shut down, Aristide Makricosta. Aristide is the relentlessly elegant and coquettish emcee at the famous Bumble Bee Cabaret, whose glitter and flirtation hide a razor sharp mind and an unyielding will. To say it’s complicated would be an understatement. Donnelly manages to give Aristide real layers of vulnerability and sharpness beneath his greasepaint and glamour and it’s fun to see his complexity revealed throughout the novel, particularly as his true devotion to Cyril is revealed.

AMBERLOUGH is the kind of novel that makes you want to throw adjectives at it, and her alternate world has a well-deserved sense of place and immediacy.

Cordelia is a native Amberlinian from the wrong side of the city with a strong will to survive. As the invasion of the Ospies and their steady progression towards power squeezes the life out of the city and the theater Cordelia loves, she’s drawn steadily into the dangerous clash of Cyril and Aristide’s conflicting desires and lifestyles. Cordelia’s progression from saving her own skin to wanting to save the city is a fun arc. While the focus is mostly on Cyril and Aristide, Cordelia’s low-class upbringing is a good counterpoint and makes her a memorable character.

Each of the characters is a thoroughly modern protagonist in the sense that they are complex and morally complicated. They are all performers and readers can’t help but like them, even admire their verve and grit, as they make increasingly troubling choices to extricate themselves from the repressive regime that abhors the lives they have so painstakingly crafted. Donnelly’s exploration of these characters complex motivations is believable even as it is gut-wrenching.

Despite the inevitability of tragedy, Donnelly keeps readers interested with the ‘how’ and the ‘why’ in her narrative. However, anytime a novelist depicts a sweeping, nationwide change it can be easy to get a little lost in the details. While there was a loss of momentum in the middle of the novel, I noticed it less than I might have because I was still enjoying the characters and the writing. Additionally, Donnelly’s chapters are short and crisp, pushing the narrative forward at a good clip so that the even the slower parts don’t drag as much as they could. The only downside to this pacing is that it sometimes pushes chapters into something more like vignettes, which even when arranged prettily together feel slightly repetitive. However, Donnelly soon picks up the threads and tightens the noose around Amberlough and her characters, and the ending is satisfying and saddening all at once.

While AMBERLOUGH covers a discrete set of events, it leaves you with plenty of loose threads to follow into the next book. Donnelly’s debut is a welcome relief from typical fantasy tropes. Instead of wizards and dragons there are plenty of spies, smugglers, and performers who lie, cheat, and extort, first for their fortunes, and then for their lives. In the middle of a breathless cabaret, your won’t miss the swords and sorcery.