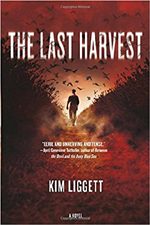 As I’m sitting down to write this review, I’m reminded of a card game that my oldest child taught us one night. It’s very similar to Uno, only played with a deck of face cards, and there are a whole lot of rules that the “director” of the game gets to make up. The rest of the players then spend the rest of the game trying to figure out what those rules are by watching the director abide by them and then trying to decipher what the rule governing the director’s actions might be. And then obviously duplicate all of them in such a way as to win the game before the director does. It is a wholly frustrating and ridiculous game, and I’ve forever banned it from being played at my house if I have to be involved. What can I say? I guess I just like knowing what the rules are when I get involved in something. That goes doubly for my reading experiences.

THE LAST HARVEST (Amazon) is Kim Liggett’s second book and falls into the YA horror genre just as solidly as her first book did. In my mind, that genre is defined by two concepts: the main characters are young adults, and the story is going to freak you out to the maximo. Unfortunately, that definition doesn’t preclude all kinds of adult content getting put into such books. There seems to be a whole lot of YA fiction these days that is allowing more and more sexual, violent, and profane content through their gates, and this novel is definitely one of them.

Clay Tate lives in a relatively small Oklahoma town. He used to be the high school quarterback. No longer. A year ago his father went nutterball and slaughtered a bunch of pregnant cows and was subsequently trampled and then eaten by the rest of the herd. Shortly thereafter, Tate nearly kills a kid on the football field with a solid tackle. It’s all too much for him, and he quits, but the town is on the watch to see if he’ll go crazy just like his dad did. It’s kind of a bum deal, but that’s the way of things. Especially when you’re in high school. Ain’t it the truth? Everyone always watching for the kid that fails. Of course, things start to get dicey on the one-year anniversary of the night his dad died. Tate starts seeing things, and hearing things, and soon enough bad stuff starts happening to everyone around him, and he begins to suspect that he’s about to lose his mind, just like his dad.

The story started out pretty good. It was set up about like I’d expect for a YA novel. Most of that included the bulk of the town, Tate’s family, Tate himself, high school, the buddies, the bullies, etc etc. Once all of this is laid out, then the crazy starts to happen. But instead of the tension ramping up from that point, everything drops into a slow, steady downward slide as more and more happens that neither I nor the main character understood. There’s hallucination, and murder, and betrayal, and then it drops into Satan worshipping, which kind of surprised me a little because there was so very little reference to God anywhere else. And seriously, what is The Devil without God? It’s like having a story with Joker in it and Batman is nowhere to be found. Or having Lex Luthor terrorize a town and Superman can’t be bothered to even show.

If you need this whole mess wrapped up neat with a bow, I'd simply say THE LAST HARVEST is very much a book to leave on the shelf where it is.

This lack of understanding absolutely killed any possibility that I was going to get into the novel or the plight of the main character. More than this though, a secondary character gets introduced along the way, and it becomes fairly obvious that the story should be getting told from her perspective instead of the QB’s as the events that are occurring in the town have a direct tie (read that again… DIRECT TIE) to her past. She’s the one that understands all of the rules. She knows what’s going on. Not the QB. This was especially evident when Tate’s subconscious starts telling him where to go because when he’s thinking logically he has no idea what to do. This leads him directly where the bad guy wants him to be, funny enough. I guess the author had to get Tate to go somehow, so why not?

There’s this rule that kept scrolling through my mind the entire time I was reading this book, and it goes something like this: tension, or suspense, comes from knowing exactly what is going on — the more you know, the more tension there will be. That’s Hitchcock, people, and yes I’m paraphrasing but you get the picture, yeah? Without know what was going on the book devolved into a bunch of scenes with grisly animal deaths, icky human deaths, and satanic worship that didn’t engage me as a reader at all.

On general principles, this is a YA book that, for me, doesn’t belong in the hands of any young person because of the amount of offensive content in it. Completely aside from that though, it’s not likely a book that I would recommend to anyone because of a decidedly large lack of coherence and understanding by yours truly. If you need this whole mess wrapped up neat with a bow, I’d simply say this book is very much a book to pass by. Not worth the time.