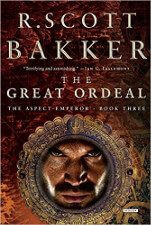 There’s this unfortunate but sometimes entirely true analogy I’ve heard about how particular kids can be a kind of birth control for their parents. If the kid is especially difficult or energetic, they’ll entirely remove the desire of the parents to have another one anytime soon. Despite this, it is also true that time is the great eraser of memory, and after long enough even the trauma of those months and years can fade away and parents will find themselves diving back into the shark pond of parenthood once again. I found myself in a very similar state of mind, and yet completely cognizant of the decision that I was making, when I picked this book up. After all, I had been less than satisfied with the previous book in the series, but still I found myself wanting to read this next one. Thus, it came as no real surprise to me that it had been something like five years since THE WHITE-LUCK had been released, and I was able to uncheck the mental box that was pleading insanity and instead was able to chalk it up to good old memory loss given the ravages of time. And yet, once I got into the book, I found much of my same feelings about the previous book rushing back in to fill the supposed void of time. So much for memory loss.

THE GREAT ORDEAL (Amazon) is the third and penultimate book in the Aspect-Emperor quartet. For fans of this series, one of the up-sides of the five-year waiter this book is that Bakker has apparently already written the end of the series. Actually, he pulled a Martin on us and turned one book into two. And not two middling books either, with this one weighing in at over 500 pages. The “final” book in the series apparently got too big to handle, and so the Aspect-Emperor trilogy is now a quartet with The Unholy Consult, from recent online appearances, being fairly far along in the process toward completion.

I don’t think it’s too much of a stretch to say that I’m not a fan of the way this second series has been written. The Prince of Nothing trilogy pulled me in hook, line, and sinker because of the great depth of character I found there. Everything about the story revolved around the characters. It has become painfully clear to me though, that for all intents and purposes, this series revolves around a single character, Anasûrimbor Kellhus, and his purposes for the world of Eärwa. This is no real surprise given the fact that the series is entitled “The Aspect-Emperor”. Everything revolves around him. Everything. And yet, if the story had been told with that same depth of character evolving due to the influence of Kellhus upon them, this series would very easily rank with fantasy series that I hold in highest regard.

Instead, within the books of this series the depth of character has been removed almost completely and instead a very omniscient narrator tells us everything that is happening and the significance of every event. What this does for me is both destroy my ability to connect with the characters and destroy the possibility that I will enjoy the story. Which is a real shame. Bakker has done an enormous amount of world-building for this series. Seriously, it’s staggering. Easily on the level of that found in Erikson and Esselmont’s Malazan series. There is so much to absolutely love about what Bakker has done for this series. He’s put in his time to build a solid foundation for the story he wants to tell. This is incredibly evident by the recap we get in the first section of this book, entitled: What Has Come Before. Just wow. Reading those pages made me almost excited to get back into this series.

And then I got into the real pages of the book.

Proyas is a captain in the army of the the Great Ordeal, and spends most of his time in this book either speaking with Kellhus or trying to come to terms with who he thinks Kellhus is. Kellhus relays to him that he is trying to train leaders for the battle against Golgotterath. None of his sections were of much interest to me at all. Lots of questioning and navel gazing.

Sorweel, one of the believer kings that used to be traveling with the army of the Great Ordeal, has been sent as an offering of good intentions to the Nonman enemy by Kellhus along with Kellhus’s son and daughter. Of all the characters, I think this character had the most potential in my mind because he was our first glimpse into the reality of the Nonmen. And yet, the overwhelming majority of Sorweel’s time is spent with him wandering around not knowing what he’s doing or why he’s doing it because he’s literally hijacked by the author to become a conduit for the world-building involving the Nonmen via a convenient-seeming literary-device. And though, while mildly interesting, I found I didn’t much care for any of it because of how it was presented.

Esmenet, although minimally present, is primarily overridden by the storyline of her youngest living son, Kelmomas. This character was easily one of the most interesting to me because he was one of thievery few characters of interest to have his own agenda and motivations. It was only in these sections that I began to find the deep character that I wanted to find everywhere. The most difficult part of this condition is that I know that Bakker can give us character-driven story. He’s done it before throughout the Prince of Nothing trilogy and we see some more of it here with Kelmomas as he begins to understand who the White-Luck Warrior is and what exactly he is doing in the palace Kelmomas’s mother is trying to hold together.

And finally there is Drusas Achamian. Our ever-present skeptic, still searching for the origin of the Dûnyain and Anasûrimbor Kellhus, which is almost ironic at this point given how much Kellhus himself does throughout the book to let those around him know exactly what he is and what he is not. Then finally, Achamian finds some answers in Ishuäl and the Dûnyain remaining there.

Outside of the good stuff that Bakker has given us here, which is really pretty solid, there was a lot that absolutely killed the experience for me. Even though Bakker has an incredibly intelligent and fluid way of writing, his use of italics and ellipses is still as absolutely egregious as it was in the previous book. They’re predominantly used in the sections where an Anasûrimbor is present. Once away from them, which isn’t very often, they magically disappear.

Clarity was also an issue for me when I really felt it was necessary. When relaying information and history there is specificity galore, but whenever something of note happened, I found myself wanting for more. Instead, I found weak half-statements and vague references with a large amount of lack of context. This pattern was repeated over and over and was especially significant during the climax of the book when Kellhus starts to do something other than just talk to people.

And do you remember all of that world-building I mentioned? It seems that Bakker is very proud of it because we get the bulk of it in all its naked glory. Every other page seems to be filled with names and history and enough fancy made-up words to make Tolkien jealous. Is that bad? Not necessarily that it’s all there, but in how it’s presented, absolutely yes. Info-dumps just aren’t engaging. They’re boring and they slow the pacing of the story down considerably. I don’t care how detailed and impressive it is because it just gets tedious if we’re not seeing that history through the eyes of a character. Character is everything.

One of the most impressive fantasy series around, and yet also incredibly frustrating and overwhelmingly disappointing because of how the story is told.

Easily one of the most impressive fantasy series around in terms of its scope and creativity, and yet incredibly frustrating and overwhelmingly disappointing because of how the story is told. As such, I can’t exactly give a glowing recommendation of either this book or the Aspect-Emperor series, but I can’t help but steer people toward the Prince of Nothing series at the same time. And yet, the first will inevitably lead to the latter. So, pick your poison if you’re unfamiliar with the series. If you’ve loved the previous novels in this series though, you’ll likely love this one as well with everything that happens by the end.

And sorry, this one got a bit long. After the knee-jerk-reaction feel to my review of The White-Luck Warrior though, I really wanted to make this one a bit more solid. Happy reading.