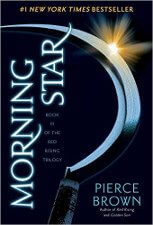 I like movies. They’re fun and entertaining and worthy of our time as consumers. Well, at least some of them are. Books are much the same, and we here at EBR are more than willing to tell you which of them you should be willing to give your precious time to. In this aspect, books and movies are quite similar. They are also quite different though. For instance, story-telling techniques that work well in a movie, don’t always work good in a book, and vice versa. Sometimes catastrophically so. I was reminded of this fact quite pointedly while reading this book. Mainly because I know they’re working on the movie for Red Rising, the first book of this series. A movie that, in my opinion, cannot come soon enough, but better not come before it is absolutely perfect, dangit. Because this series deserves a perfect movie.

MORNING STAR (Amazon) is the third and final book of the Red Rising trilogy, which has been one of my favorite series of recent years. Or should that be months? I mean, I did go through all three books in the series pretty quickly, but I’m pretty sure it took the guy somewhat longer to write it than I took to consume it. Ah, one of the ever-unfortunate circumstances of the author-reader relationship.

So, the end of GOLDEN SON left me reeling. I couldn’t believe the way that it finished and was sent nearly scrabbling to the library to see if this last book of the series was yet available. MORNING STAR starts almost immediately after that ending, gives us a short reminder of Darrow’s situation, and then skips the next year. Darrow has spent that year trapped in a box and tortured at the whims of The Jackal. In that time it has driven Darrow nearly insane, as it would anyone in similar circumstances. He doubts not only himself but the world around him. His beliefs. His family and friends. He doubts everything and it’s pushed him to the very edge of doubting the need for self-preservation. It is only, nearly a year later, when he is taken from his box and paraded in front of those the Jackal surrounds himself with, in preparation for sending Darrow’s emaciated frame back to the Sovereign, that Darrow’s friends snatch him up and save him from that fate.

I don’t think I’ve ever been hit with so many emotions so early on in a book before: cry, cheer, shudder, shiver, laugh-out-loud. Just seriously amazing opener to this book. Here we see that the loyalty of the Darrow’s friends to him is exceeded only by his loyalty to them. Time and again he returns for them to bear them up and save them from death when they are in danger. But don’t think that they are all safe because of that. In the EBR review for RED RISING, Nick made a comparison between this story and the one written by GRRM because of their respective characters. Let’s just say that Martin’s proclivities for some of those main character’s deaths are mirrored in this story as well. And it is tough to bear.

The story itself is full of twists and turns. Lifts and falls. The story we’ve been following, watching it develop as Darrow has lived it, takes a mighty large turn in this book as he begins to realize that not only does he have the distinct possibility of succeeding, but also that the effects of his ambitions are going to take a major toll on the world at large. He doesn’t know how it’s all going to turn out. He wants for the best, but there is even dissension within the ranks of his own army because of tensions between the various Colors. The ruin at the end of GOLDEN SON destroyed his plans, and he’s had to make changes; to rally the troops so to speak after they had all been assured of Darrow’s death and the end of the Rising.

This had to have been a pretty difficult book to write. There’s so much that had to take place, and that shows in the length of it. But also in where the story goes and how much ground it covers. Yet still it finished off remarkably well. There were a couple weak points that seemed minor problems: Darrow seems to come back from the lip of insanity rather quickly, and Brown’s sparse writing can sometimes make powerful scenes seem to go by faster than I thought they should have. And yet, Brown’s ability to pull off what us writers call “the iceberg effect” (including 10-15% of world-building and yet making us feel all 100%) is pretty impressively done. He just gets all the details right that allow the story to feel both epic and intimate at the same time. I have a confession: when I grow up, I want to be able to write like Pierce Brown.

***EDIT: I’ve been asked to give a spoiler warning for these next two paragraphs, and although I’m not giving away any part of the story it’s likely that reading them will affect your reading experience if you’ve not read the book yet. Still I feel like this is an important part of my review, so I’m going to leave them in. Thus, reader beware.

The largest sticking point for me was a doozy though–close to a nuclear strike on the readership-trust scale. There’s a fairly long sequence of events that occurs in which Darrow is completely complicit and yet he acts, thinks, and reads-on-the-page as if he knows nothing other than what is happening around him. It was quite easily the largest betrayal of trust that I’ve ever come across in a series of books that I’ve enjoyed as much as this. The moment at the end of that string of events when I learned that Darrow hadn’t been telling me everything, nearly made my heart wither away completely. Stuff like that is a big deal for me, as a reader.

I have a confession: when I grow up, I want to be able to be like Pierce Brown. MORNING STAR is so absolutely fantastics that I can't stop thinking about it

All that being said, the movie version of those scenes is going to be absolutely, ridiculously brilliant.

I’ve heard through the grapevine that Brown’s busy working on his next book: the beginning of a new series dealing with the fallout of this trilogy. Can you see the grin on my face? Oh, my goodness. I am so glad that we have Pierce Brown to write for us. He’s one of the good ones, people.