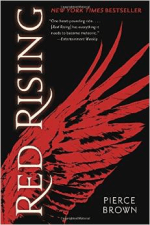 I originally dismissed RED RISING (Amazon) by Pierce Brown because of the immense level of hype behind the debut. RED RISING was being touted as the next THE HUNGER GAMES, as it seems the majority of Young Adult novels are marketed these days. Being that I consider THE HUNGER GAMES a vastly overrated and underwhelming novel I gave RED RISING a pass. I purchased a copy several months ago on a whim, unwilling to leave the bookstore empty handed. It sat untouched and unloved near the bottom of my To Read Pile until the recent release of GOLDEN SON (Amazon), book two of the trilogy. News of the sequel drew my attention back to the series and I decided to give it a shot.

I should have jumped aboard the first car of the RED RISING bandwagon when I had a chance. I absolutely devoured Pierce Brown’s debut — reading for hours at a time, even skipping dinner in order to finish the book during a frenzied four-hour reading binge. I’ve read a lot of good books lately nothing on the level of RED RISING in a long, long time.

To those of you fiction snobs concerned with the Young Adult label (as I once was): no matter how RED RISING is marketed it is not a YA novel. RED RISING has a young adult cast of characters and features some themes and concepts that have become popular within the genre of late but it does not read like a typical YA novel. It’s longer, less dialogue-driven, more detailed and descriptive, and the teen protagonist doesn’t really suffer from teen protagonist problems. With a few notable exceptions I’ve come to appreciate YA authors for their creativity and boldness but RED RISING doesn’t fit the mold.

Here’s the description from Amazon…

Darrow is a Red, a member of the lowest caste in the color-coded society of the future. Like his fellow Reds, he works all day, believing that he and his people are making the surface of Mars livable for future generations. Yet he spends his life willingly, knowing that his blood and sweat will one day result in a better world for his children.

But Darrow and his kind have been betrayed. Soon he discovers that humanity reached the surface generations ago. Vast cities and lush wilds spread across the planet. Darrow—and Reds like him—are nothing more than slaves to a decadent ruling class.

Inspired by a longing for justice, and driven by the memory of lost love, Darrow sacrifices everything to infiltrate the legendary Institute, a proving ground for the dominant Gold caste, where the next generation of humanity’s overlords struggle for power.  He will be forced to compete for his life and the very future of civilization against the best and most brutal of Society’s ruling class. There, he will stop at nothing to bring down his enemies… even if it means he has to become one of them to do so.

RED RISING is a cross-genre chimera composed of fantasy, planetary romance, and dystopian fiction. If you took all of the lessons in leadership learned at Battle School from ENDER’S GAME, spliced it to the gladiatorial violence of THE HUNGER GAMES, populated the competition solely with sociopaths from A GAME OF THRONES, and draped it all in the aesthetic of Frank Herbert’s DUNE, you would get RED RISING. It’s become a cliche to use any of those titles when pitching a book (especially THE HUNGER GAMES and A GAME OF THRONES) but Pierce Brown’s debut is the rare outlier to deserve the comparison.

RED RISING is the impossibly rare novel capable of exceeding the hype heaped upon it. Romans and Vikings in post-apocalyptic space from the POV of the slave

Darrow is difficult to like at first. He’s young and he’s brash. His arrogance is particularly chaffing. Darrow’s love for his life Eo is his one redeeming quality at the beginning of the novel and it becomes the catalyst for Darrow developing into a memorable multi-faceted character.  The natural comparison is to relate Darrow to ENDER GAME’s Ender Wiggin, though I feel that Bean is a better match. He makes mistakes, he learns lessons, he is forged from a petulant child seeking revenge into a wise and courageous leader with a vision for the future. He becomes a conqueror but he does not accomplish this alone.

RED RISING has a significant cast of characters and a good portion of them are psychos — it’s awesome.  The Golds are society’s elite, the rulers above all that have enslaved Darrow’s people and lied to them for centuries. Even within the ranks of the Golds there is stratification and in order for Darrow to reach a position of power where he can spark the revolution necessary to free his people, the Reds, he will have to fight his way to the very top. At the Institute Darrow is forced to become what he despises most but he also learns that not all Golds are pure evil and this adds another layer of moral complexity to the novel. Darrow builds close bonds in the crucible of the Institute, befriending the very caste that saw his wife executed. Readers will find themselves as conflicted as the protagonist as they come to love the likes of Cassius, Sevro, Mustang, Telemanus, and more. Telemanus, oh, Telemanus. What’s not to love about a character that charges into battle screaming his own name and tackles horses?

I would caution becoming too attached to any of these characters, however, as danger and treachery lurk around every corner. The Institute is not for the feint of heart. Admission alone costs the life of another applicant. The Institute is designed to cull the weak and teach the survivors to govern by applying the twisted logic of the Golds. The curriculum is conquest. Each applicant belongs to a House, each House has a fortress and a banner, the goal is simple and the rules are obscure. There is violence and betrayal (and plenty of it) but it never feels gratuitous. Everything serves a purpose and feels like a natural extension of the setting.

The universe RED RISING is set in is a sort of science fantasy where man has terraformed and colonized planets but disagreements between nobles are settled with high-tech swords. The culture of the Golds has an obsession with the Roman Empire but launches fleets of spaceships capable of reducing entire worlds to ash with nuclear weapons. It’s a fun and captivating setting that doesn’t overly concern itself with actual science.

RED RISING is the impossibly rare novel capable of exceeding the hype heaped upon it. I’d hate Pierce Brown for writing such an incredible debut it if I weren’t so excited to have a new favorite author to add to the list. RED RISING is dark and mature, complex and imaginative. Writing this review was excruciating because all I wanted to do upon finishing RED RISING was to jump right into reading GOLDEN SON.