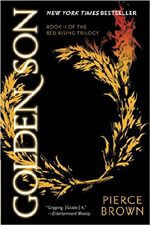 I think I’ve mentioned before just how utterly cool it is to have this job as a reviewer. The other week I was having this conversation with a couple guys from work that went something like this:

Turns out he’d been following our site for quite some time and we were only then figuring it out. Way cool stuff. Love it when that happens. Of course, there are down-sides to the job too. The one that probably irks me the most is that there are times when I just don’t feel like I have the free time to read a book off-the-schedule that I’d like to because I really need to read from my ever-growing review pile in order to keep up with what I’ve committed to writing. Occasionally though, I do get to go off track for a bit, and thus it was, with a good degree of tardiness, that I finally got around to read Red Rising (EBR Review) recently. Immediately after finishing, I ran out and got Golden Son, because RED was seriously amazing. And now I’m here writing this, and I’m able to tell you that the next book in the series is just as amazing, if not completely more so.

GOLDEN SON (Amazon) is the second book in the Red Rising trilogy by Pierce Brown, and I’m having a massively difficult time not being jealous of the bang-up job he’s done on this, his DEBUT series as an author. I have to pick my jaw up off the floor every time I say that–just wow–because this series doesn’t read like it’s coming from a newbie. Wikipedia told me that he wrote six novels before selling Red Rising, but still that doesn’t seem enough to me. But then I got to the kicker: he wrote Red Rising in two months. Yeesh. I mean come on, dude, where did you get these chops?

Straight out of the gate, I realized that this was not your typical sequel. There’ve been comparisons to Hunger Games, yeah? Well, if this sequel had been like Hunger Games then it would have started with Darrow, fresh from the slaughterhouse of the Institute and launching off into the grip of Battle School, where he would learn the ropes of being the captain of a starship and how to wage wars against the great houses amongst the dark reaches of space. Instead, it starts at the end of that second, vicious learning experience for him,two years later, and gets right to continuing the heart of the story: Darrow’s quest for vengeance and retribution. We start with Darrow having had a load of experience and learning, and yet still seething with the fight.

In the Institute of Red Rising we saw several aspects of the ruling class of people, the Golds. We saw their intensity, their arrogance, their frequently psychotic drive to be the best. But we also saw the good in them. In those that rallied around Darrow and became his closest friends and companions. This theme was continued, to my great excitement, in this book, only it was brought to a completely new level. Because now we’re not seeing the children of the beast and their adolescent and sometimes puerile attempts at controlling those around them. This time it is with the parents, the actual elite leadership of the Gold society, that Darrow interacts. It is with these genius, power-hungry, and ultimately twisted minds that Darrow pits his drive for success.

Whereas Red Rising played along the upper boundary of the YA genre, GOLDEN SON steps fully into the adult world. There is no one waiting to step in and save him in this world, as there was at the Institute. Not only this, the world at large is so much more complex than his previous life beneath the surface of Mars or the Institute ever were. Violence and betrayal seem to never be more than a step distant in this tale. It includes Darrow’s concern over Mustang’s loyalty to him or her house, as he strives to run the topsy-turvy balance between making the Augustus household more powerful and setting Mustang’s father up for the ultimate fall. It wrangles Cassusis’s hated of Darrow for killing his younger brother at the Institute, and how his feeling are echoed and intensified by every member of the Bellona family. And then with the battle that is brewing against the Sovereign herself and the forces she wields, for it is with her that his ultimate battle lies.

The setup impressed me, the execution enthralled me; a stunning and captivating sequel that is even better than its absolutely brilliant predecessor.

Throughout it all though, it is Darrow’s friends that hold him together. It is their loyalty and love that buoy him up and make him strong. All those that he has lost along the way, including his wife, Eo. All those that he will yet lose as the pillars of this society come crashing down. All these, yes, and all the lost lives of his people, the Reds, as well are what is driving him to subdue the society of the Golds. And he wants it more than anything else in existence.

The setup impressed me, the execution enthralled me, but it was the character of, and loyalty to, Darrow the Reaper, that has won me over to this author for life. A stunning and captivating sequel that was, in every respect, better than its absolutely brilliant predecessor. Everyone should be reading this series. Everyone. And did I mention they’re making a movie? Oh yeah.