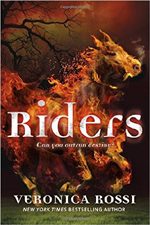 Phew. Did you catch all that? In RIDERS we are taken on a wild ride–and not just because Gideon is afraid of his crazy war horse.

The book starts out a little confusing, so don’t be deterred (no you haven’t missed the first book, keep going). Gideon is in custody and being interrogated about events we’re going to learn about. Fortunately Gideon doesn’t leave anything out as he re-tells the unbelievable events as he and Daryn seek out the other three horsemen. Sebastian (Famine) is discovered at an LA television show audition; Marcus (Death) is discovered in the Nevada desert, with an obviously stolen Mustang; Jode (Conquest) is found drunk in Rome. And all along the route, the demons, lead by Samrael, tries to thwart their attempts to become the team they need to be in order to protect the key. Daryn’s status as “seeker” keeps these very different guys from imploding–but it’s the guys who must learn to work as a team.

Gideon struggles because he sees what needs to be done, but not only do the others not have much combat experience, they also have their own issues. There’s also a sweet love story between Gideon and Daryn that is handled better than most YA books I’ve read. Rossi does an admirable job with the characters, especially with the limitation of Gideon’s point of view, and the fact that the book is one big flashback. There’s still so much more to know about Daryn, Marcus, Jode, and Sebastian, so by the end their characterization felt incomplete; I’m hoping to see more character development in the sequel.

Gideon is the Incarnation of War.Horseman of the apocalypse. Yup. He's in Army Ranger training, doing a routine parachute jump, and the impossible happens.

Four horsemen re-tellings aren’t new, but the Young Adult angle is, and Rossi’s version is pretty fun. Each horseman has his specific horses, weapons, and abilities that we’re introduced to as the story progresses; the demons have their specific abilities here, too. When they fight Rossi displays theses abilities and limitations in a believable way, especially since Gideon and the other riders are learning as they go. The story takes place in a modern world, so there isn’t much world-building here, other than the lore behind the horsemen, demons, and seekers like Daryn. It isn’t groundbreaking, but it works for the story.

The story moves pretty quickly–sometimes so quickly that I got a little lost in the movement as characters fought or traveled. There was a little suspension of belief toward the end, but Rossi sets up the story well enough, and I was invested in Gideon’s narrative that I was compelled to finish it despite those problems. Gideon’s voice is fun to read, it’s easy to hear the teenage boy in him, and his narrative makes his story accessible despite the novel’s issues. His earnestness as he struggles through understanding himself and the story’s events is endearing–it’s easy to like him. In all, RIDERS is an engaging read for your kids, especially those teen boys who have a hard time finding something they like.