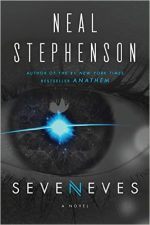 It’s been a while since I read a Stephenson book, and I was in need of his kind of storytelling. Smart, funny, character-centric, inventive, informative — his books, for me, stand tall and somewhat apart from so much of the other writing out there. This one pushed a lot of my buttons, but strained my patience quite a bit, too. It’s a novel for our times. A story of very-near Science Fiction that is about an apocalypse that we haven’t read before (e.g., planetary self-destruction, religious fruition). This one could happen tomorrow, and I think, for the most part, it could all feasibly happen. Made it personal for me and fun to boot.

SEVENEVES by Neal Stephenson (Amazon) is a novel that was a long time in coming, and like so many of his other novels, has a very long story to tell. It’s told in three parts — almost clinically so — and each part is unique and almost a story of its own. It’s told from a number of character viewpoints, but the large majority come from Doc Dubois (Doob) Harris and Dinah Macquarie. He is a scientist’s scientist. You’ve heard of Bill Nye the science guy, yeah? Well Doob here is Bill Nye for the politicians of the world. They all look to him when it comes to questions dealing with science beyond their ken. So it stands to reason that he’d be central to so much of what happens in a near-future science fiction apocalyptic (almost) thriller. She is a scientist currently inhabiting the International Space Station (ISS, or Izzy) with work involving the harvesting of precious metals from a “small” asteroid named Amalthea.

The story starts exactly the way stories are supposed to start: with a bang. Something catastrophic happens to the Earth’s moon. It’s not apparent what has hit it, or even IF something has hit it, but it’s obvious that the moon has broken into several pieces. Lots of scientists and non-scientists alike get interested very quickly and it all lands in the wow-factor category until some intrepid graduate student decides to try and model the new 7-piece moon and realizes that very bad things are going to start happening very soon. The pieces are going to start knocking into one another, making smaller pieces, and further collisions smaller pieces yet, which will eventually start to get sucked into Earth’s gravity well and the resulting hail storm of moon pieces entering the atmosphere is going to turn the planet into a veritable fireball for the next several thousand years. That deadline is less than two years away.

The first part of the book is told predominantly from Doob’s PoV as the inhabitants of Earth try to prepare a way to save the human race. The development of the story as the impact of these events race around the globe are shown in the small details (choosing individual population representatives for the mission to save the human race) and the large-scale (political machinations, declarations of war). We see humanity at its proudest and moments as they band together in an effort to survive, and yet also at its meanest and weakest, as the deadline of certain death draws ever closer and panic starts to set in. It’s all very well-written and detailed — sometimes exhaustively so, drawing down into the fumes of the tank with everything that is brought across to the readers. The balance between character-centric and explanation-laden was heavy-handed and wildly-erratic at times. There were times that I wanted to bail because of how bogged down the story got with description and explanation, and yet those character moments would pull me back in and make me only want more.

The second part of the book comes mostly from Dinah as those that have been brought up into the atmosphere of Earth now begin the fight to not only avoid death by other humans and moon-fragment impact alike, but also to find a way to survive in the long term. After all, they’re going to be up in the darkness of space for the next several thousand years, and they’re going to need things like water and food and more than five cubic feet a piece to float around in. This part of the story was where my geek antennae lifted high up off the crown of my head, as Stephenson showed off some of his nerdy, techie ideas, and also how those living in the new strictures of space found both mercy and justice from the cold, dark expanse of vacuum. I enjoyed this middle part the best, and I found the journey well-worth the time spent. Even the longer explanations in the first part were worth it to get to the good stuff here.

In SEVENEVES Stephenson really does a great job of telling the apocalyptic story following the destruction of the moon. Read that part. Skip the end.

I had some issues with the last part of the story though, and this is really where the decision for my rating can be laid to rest. Never have I found a book that was so much a Like and a Hate as dictated by a certain location in the book. That location was the beginning of the third part of this book. It begins five thousand years in the future and was essentially a story almost completely of its own design. The results of the first two parts of the book became almost a mythology, or creation story, for what came here. The problem is that this “story” is about 5% actual story and 95% explanation and description. It’s more like a telling of the encyclopedia that resulted from the author’s world-building disease, as told through the eyes of a single character as she finishes one trip down to what remains of Earth and begins a second. It was so horribly boring and ultimately pointless that I almost want to encourage readers to stop reading at the end of part two. After all, that’s where all the good stuff really ends.

I guess I will.

Stephenson really does a great job of telling the apocalyptic story following the destruction of the moon. Read that. Skip the rest.