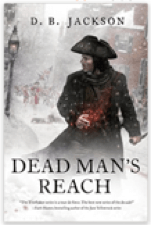 EBR: Everyone welcome our newest reviewer, mtbikemom, a long-time reader and friend who’s agreed to help us work through the pile of books stacking up at EBR headquarters. We’re sure you’ll love her as much as we do.

If a reader is looking for better-than-average female characters in a magically enhanced historical fiction novel with some ripping action scenes, D.B. Jackson’s DEAD MAN’S REACH (Amazon) will satisfy.

I need a bit more in a story than that, however.

The well-done cover art looks like Johnny Depp and Hugh Jackman’s love child. I had hoped the protag would be gorgeous, but I have my doubts. DEAD MAN’S REACH is a standalone even though it is the fourth book in the Thieftaker Chronicles and features most of the same characters, so I expected something to draw me into the story.  Not an obvious hook, but… something.  Instead, we are plunged right into the action without much time spent on character building and that left me wanting.

It’s kind of like bringing your kid into a room full of acquaintances and assuming they’ll automatically love the tyke as much as you do. I mean it’s a kid (book), and who doesn’t love a kid?  Now, if you had come in with a plate of cookies and the kid did a nifty song and dance… But that’s not what we get here. What we get in the opening scene, which lasts several chapters, is a possibly intriguing character doing some potentially interesting stuff accompanied by a dry info-dump or three about characters and a magic system we really hope we’ll like. But, uh oh, now we get Latin spells that take me right to Hogwarts.

At this point, as a reader only, I might have put the book down. I persevere so that perhaps you won’t have to.  The characters are pleasant, at least, and quite sympathetic. Goodman Ethan operates magically as a thieftaker, recovering lost and stolen objects or offering protection in a time (pre-Revolution 1770) when even a hint of witchcraft is grounds for the hangman’s noose. Something odd is occurring in Boston: one event after another tests the precarious truce between the hated redcoats and the Sons of Liberty, resulting in riots and murder. Ethan has been through hell early in life, but somehow retains a heroic concern for justice and morality; unfortunately this is did not ring true for me. Our brave and noble thieftaker eventually gathers forces, even one intriguing nemesis, to fight the good fight. His odds for success become slimmer and less likely as the book progresses. Tediously so.

DEAD MAN’S REACH is a boisterous, perilous romp that will appeal to fast readers with an interest in American history and able to overlook a few flaws.

Like the aforementioned Potter-esque magic system, consequences are negligible and spellcraft is often ineffectual. Thoughts of “if they can do this, why can’t they just…” distracted me. I mean, “magickers” can heal themselves! Despite that, the action is unrelenting and even sparkling at times, and the finale reads like a better-than-average video game. The pacing and readability of the action scenes really elevated this otherwise disappointing book to mediocre, though the dialogue and overall story were generally plodding. Many of the secondary characters were interesting, but the big baddie is pure evil. No nuance whatsoever. Most characters lack development and depth and often behave in ways that do not fit the setting. “Free love” before the American Revolution?  Don’t think so, not without scarlet letters and magic birth control and such, which are notably absent.

DEAD MAN’S REACH is a boisterous, perilous romp which might appeal to a fast reader with an interest in American history who is able to overlook a few flaws. Ethan is a well-used anti-hero who just happens to be the perfect Colonial man in love with the best girl in town.  Tired tropes, anyone? Despite its well-researched historical accuracy, I am not inclined to read any more of these.