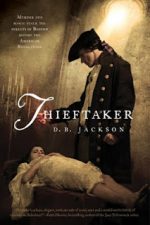 THIEFTAKER by D.B. Jackson (Amazon) is one of those books that leaves me with confused impressions. This novel has a lot going for it–Urban Fantasy in  a historical setting, a fun protagonist, a mystery, magic…you get the drift. There is some great potential here. But there are some things that are juuuust off.

The best way for me to describe my feelings to to go at it like I would when I read people’s manuscripts for the purpose of feedback.

Let’s start at the beginning.

THIEFTAKER starts with an initial chase scene and action sequence. It is a good introduction to the setting, the magic, and the main character.  Ethan Kaille is our protagonist, and he has a subdued Harry Dresden vibe about him. He’s older, world-worn, and he’s a thieftaker and conjurer. I liked the character right away. This is perhaps one of the biggest draws of the novel for me–the mix of Urban Fantasy in a historical setting.  That setting? Colonial US, 1765.

After that initial action sequence, things really slowed down. We get told detail after detail about people and places, oftentimes in a scattered narrative that, while certainly getting the points across, also serves to slow the story down to a crawl.  This is one of those things I can forgive to a degree, because it really felt like the author was just trying to get it all out of the way early. If Jackson was a brand new author I could cut him even more slack. But he isn’t a new author. Jackson is actually David B. Coe. He’s been around. It’s a bit disappointing that all these details of the backstory and setting weren’t shown instead of told.

Once we get through all of the telling, we get into the meat of the story. Ethan is offered a job that is too good to be true that involves magic and murder. As readers, this isn’t exactly a new idea, but it remains entertaining nonetheless. This is when we are introduced to the side characters. None of them are in any danger of stealing the spotlight from the main character, and could have been fleshed out with a bit more consistency. Ethan’s love interest, Kannice, is particularly wishy-washy. One of the main antagonists, Sephira Pryce, never really seems to be anything more that a cardboard cut-out with several scenes of nothing but posturing (especially at the end where her villainy is totally undermined). The clergymen are the best side characters, and hold their own well.

The majority of the book follows Ethan as he investigates a few murders. For the most part this is well done. The pacing evens out, and is interspersed with some good action. Details in the middle of the novel are shown instead of listed off, which also helps things. Again, there was a lot of Harry Dresden stylings here, which I personally really liked.

THIEFTAKER has a lot going for it: Urban Fantasy in a historical setting, a fun protagonist, a mystery, magic...you get the drift.

A few things that bugged me. First, I don’t like it when an author blatantly hides things from the reader, and almost rubs the reader’s nose in it. Take this quote: “Something occurred to him in that moment, but he kept it to himself. He would have time to satisfy his curiosity later in the day…”. If you don’t want to share with the class, don’t even bring it up. It’s like saying “I know a secret, but can’t tell you about it.” Why even bring it up?

Second, and minor, but when Ethan uses magic, he always spouts off the spell in another language (no big deal), then always translates it into English. Every. Single. Time. I hate to keep making comparisons to Jim Butcher, but they apply. We don’t need a translation every time Dresden casts a spell. Why? Because we get it with context. It got to the point in THIEFTAKER where it felt like an annotation, and not even part of the story. What’s more is that part way through the novel, Ethan can cast spells in his head without saying the words. It feels introduced after the fact, and I knew right away that it would play part in the finale–which it did. To me, it hurt the urgency and drama that this wasn’t limited. It also introduces some almost plot holes and some logic flaws in the end.

The ending should have been amazing. Instead it felt… OK. Not terrible, but not awesome either. The identity of the actual villain and his motivations was actually really interesting, and I wish some more focus had been on that. But then the villain does some dumb things (he monologues–I’m not joking), and makes some very unintelligent choices from someone supposedly so evilly intelligent. The final action-ish scene is also very vague, and required my rereading of several parts to get an idea of what was actually happening. Some added clarity would have elevated this scene dramatically.

Yikes. Lots of negative there. The book isn’t that bad. To me it rides the line of “Mediocre” and “Like”, while falling in the group of the latter. The setting and ideas are enough to carry it, and the main character is likable. The main thing that seems off to me is the consistency of the overall voice of the novel. I fully expect this to be resolved in the second book of the series now that Jackson has a grip on everything.