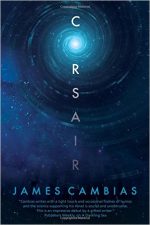 Recently, the dynamic duo of James S. A. Corey (Daniel Abraham and Ty Franck) did a Q&A over at reddit. One of the questions that came up along the way was one that I thought was pretty astute and went something along the lines of this: In your books, why are there so many manned spacecraft and a surprising dearth of unmanned, likely more cost-effective, drones doing work in space? Their response was simple: bots are boring, humans are interesting. The story told in this book tries to take a somewhat opposite tack to that and tells a “science fiction” story where all of the space stuff is handled by bots, with the humans acting in the background. And how does it all turn out? Let’s just say that our boys from the Expanse series know what they’re talking about.

CORSAIR (Amazon) is the second novel from author James Cambias. You might remember that his first one, A Darkling Sea (EBR Review), was a fun, interesting novel that I remember enjoying, even though it had a few issues. There was enough there to prove that he belonged in the realm of published authors, with a good story, solid speculative elements, and a believable race of aliens to boot. A great base to build upon. A similar foundation, however, is exactly what CORSAIR was missing. But perhaps I’m getting ahead of myself.

The story revolves around two characters, but is told from the perspective of somewhere around five. David Schwarz, aka Captain Black, is a self-styled space pirate who lives to hijack unmanned spaceships traveling from the moon to Earth with payloads of helium-3, which he can nudge into the helium-3 black market, scoring a hefty cut of the financial side. Elizabeth Santiago is an Air Force captain working in intelligence against international espionage: aka Captain Black’s opposition, and character of secondary importance. The only other minor POV character that makes a significant impact upon the novel is Anne Rogers, a girl who decides to buy a boat and abscond into the wind blowing along the Atlantic coast of the US until her money runs out.

There were several things that Cambias did well here, just as in his last novel. He has a decent story setup. The story starts with a fight scene, and the speculative elements are brought in early. David and Elizabeth have a past. Their first meeting of the book, a space battle fought between unmanned but human-controlled space ships, leads to Elizabeth being fired from her job. She obviously wants revenge, has a pretty good idea as to who she’s up against, and this fuels her motives for the remainder of the story. On the flip-side of the coin, the prowess that Captain Black shows in this first (of two) space battles of the book gives him a segue into the job that he decides will be his finale of his black-market helium-3 hijacking days.

CORSAIR has great ideas, but fairly poor execution. Science fiction without much wonder or characterization. You could do better than reading this.

There were also, however, a number of things that really didn’t work out so well. The first is the obvious lack of any kind of speculative element that integrated with the story at large. This kind speaks to the back-and-forth I had with Mike Resnick that I mentioned in my last EBR Review. Essentially, just because there’s a story about a pizza delivery guy that has issues with his girlfriend and continual indigestion is told within the backdrop of Mars, the fact that it happens on Mars doesn’t make that story Science Fiction. At least, not one that I want to read. So, even though there were fights in space that revolved around helium-3 harvesting, this story didn’t feel like a Science Fiction story to me. In fact, it read more like what I’d expect from a thriller, completely separate from the fact that anything was happening in space.

The second largest issue I had was the very lean characterization. Little to none, in fact. Perhaps this was because everything had to keep moving from one issue to the next. Again, making the idea behind this book more consistent with that of a thriller. The best characterization actually, was for the girl with the supposed wanderlust, but besides providing a way out for Captain Black at a very opportune time, her entire plotline was completely pointless. I didn’t understand why she was part of the story at all.

The third largest issue I had, and what was really the killer for me, was one that some people might be able to look past: the humor. Unfortunately, for me, nearly all of the humor came across as out-of-place and corny to me, and there was a lot of it. As an author, that’s one of the biggest dangers about trying to put humor into a book. If readers don’t get it, or don’t think it’s funny, they’re going to hate the book regardless of what the story is about. Granted, I didn’t much care for what I was seeing of the story in the first place, so…

The end of the book resolves all of the story lines satisfactorily, and even sets up the possibility of a sequel. Although, if a sequel for this book comes up, I’ll probably do my best to make sure that it gets deep-sixed into my pile of to-be-reads. I just don’t think I could handle more of this one. There just isn’t anywhere near enough to support what it’s technically supposed to be or even what it seems to be.