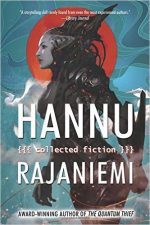 I had an argument with Mike Resnick once–okay, maybe it was only a complaint and response that found us on opposite sides of the coin–concerning what made a story a speculative (Fantasy or Science Fiction) story. I had just finished reading one of his short yarns and was frustrated because I didn’t think that any of the speculative elements had anything to do with the story and could have been left out completely without destroying the story at its core. In essence, the made up stuff was just window dressing. So the story didn’t feel like it was speculative to me and I was kinda miffed about it. I was reminded of that disagreement while I was reading this short story collection because it was quite impossible for me to disentangle the plot from the speculative elements in the slightest. They all relied completely and wholly upon the made up stuff. And I was really happy to find that.

HANNU RAJANIEMI: COLLECTED FICTION (Amazon) is pretty much what it sounds like: a collection of short stories from the Science Fiction author Hannu Rajaniemi. Huzzah! A book that purports to be exactly what it is. And not only Science Fiction. GOOD Science Fiction. By now you should all know that I love to find that. Although, there was a little of what I’d term Fantasy as well in the collection, and that was fun to see, too.

I was kind surprised at the wide array of stories in this collection. There was stuff from the fairly mundane (“Paris, In Love”) to the highly esoteric (“Invisible Planets”), from the fairly long (“Skywalker of Earth”) to the incredibly short (“Unused Tomorrows and Other Stories”), and the intensely, personal human story (“Deus Ex Hominae”) to the one about cats and dogs that sing for a living (“His Master’s Voice”). Yeah. Talking cats. Some of you know how much I love to see those things creep into speculative stories. The rest of you probably won’t have to think too hard to figure it out. That one was actually pretty decent though, if kind of weird.

The best thing about these stories was the fact that essentially every single one of them told an emotional human-centric story that integrated highly science-fictional aspects into the story telling and did so at breakneck pace. Every time I go into a Science Fiction story, I want to see good character; I want to see Science Fiction imagination; I want to see emotional impact. I got that nearly every time I dove into a new story here. There were a couple that just didn’t push my buttons. There are bound to be those in any kind of short story grouping like this, whether they are all from the same author or not.

The one that was really pretty far out there I have to mention because, as a nerd and lover of all things geek, I was really kinda mind-warped by the idea of “Snow White is Dead.” Essentially, the author and one of his buddies wrote a program that tells a story that changes as you read it, depending on how your brain responds to the imagery in the story. In order to actually read the story, you have to hook yourself up to a brain-cap and plug in. What we get in the collection is a story with a scene ordering that followed the most common path produced by actual readers. I’m not sure that the actual story did much for my story-loving side, but my computer geek side? Yeah. Off the charts.

Other than that, my favorites were as follows:

“Deus Ex Hominae”: Guy that used to be a “god,” after getting the god-virus and then being cured, is dating a girl that is fighting a war against the “gods.” As it ends up, the reason for fighting the war becomes the impetus for them to stay together. Emotional wowser.

“Elegy for a Young Elk”: A man in a post-apocalyptic world is tasked by a science-fictional angel from the heavens to enter a fire-walled city to retrieve something of theirs that has fallen from their realm and crashed there. Atmospheric to the max.

“The Viper Blanket”: Multi-generational descendant of a god, a young man goes to the church where his long-dead ancestors reside to give the annual feeding of a heathen to their god-child mother. Creepy and sinister.

This guy gets a lot of love from the Sci-Fi genre. He totally deserves it. He has an expansive imagination, writes great character, and can make me believe.

This guy has gotten a lot of love from the Science Fiction genre as a whole, and from what I can see here, he totally deserves it. The guy has an expansive imagination, he has the ability to write great character and great impact, and he has the science-based chops to throw in all of the intensely technical stuff and make me believe it.