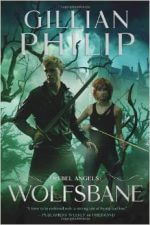 After the gripping events of book 2, BLOODSTONE (EBR Review), it’s now fifteen years later and Seth is the dun captain–a responsibility he never expected, knowing his brother Conal would inherit. Now Conal is gone, but Seth has his son Rory, whose ability to manipulate the Viel–the barrier between the Sithe world and the human world–makes him the prophesied Bloodstone, and the very person Queen Kate NicNiven wants for her own purposes.

Unfortunately teenagers will chafe under restrictions, even knowing it’s best for their well being. When Rory sneaks into the mortal world and discovers Hannah, half-Sithe, half-mortal, he brings her back to the dun.

The best part of this series are the unique and well-drawn characters. I couldn’t help but love the rogue Seth from book 1, and now he’s the only one standing in Kate’s way–she wants to destroy the Veil so she can be queen of the humans as well as the Sithe. Kate, despite Seth’s rebellion, is planning the long game, and is ruthless enough to even kill innocents if it means moving the pieces on her chessboard.

In WOLFSBANE (Amazon), by Gillian Philip, the stakes continue to grow, and the result is more characters involved in the main story. At first I was annoyed with all the PoV characters: Rory is now a teen; Hannah is a new character that proves to be a wild card; Jed’s now grown into a hardened fighter; Finn, Conal’s niece, becomes a bigger player in the story now that she’s an adult. All I really wanted was the story that resolves around Seth… who are these interlopers anyway?

PoV even switches between third-person and first-person. You’d think it would be confusing, but it works well because Philip is great with character voice, and even the new characters come into their own quickly.  They have distinct personalities and spark. And they are interconnected in ways we’re only starting to understand by the middle of the book. There were some blips in the narrative where I had trouble following character movement, but otherwise the dialogue and prose is super lean and quick to read.

We don’t learn much new about the setting of the land where the Sithe live, but we do see more of dun life, which grounds the characters well. We do learn a little more about magic, specifically what Kate is capable of, which makes her seriously scary.

The story continues with the same desperation as the previous books, and it's only the scrappiness of our heroes that sees them through in WOLFSBANE.

WOLFSBANE suffers a little from middle-of-the-series syndrome. It’s true that it has its own plotline within the overarching series plot. But despite an early bit of excitement, the book moves at a deliberate pace as we get to know Rory, Hannah, and come up to date with what’s happened over the last fifteen years–pieces are placed, loyalities are negotiated, and revenge is planned. I was hoping book three would see the conclusion of the series, mostly because I’m looking forward to the demise of the wicked Kate NicNiven (is that a cool name, or what?).

The story continues with the same desperation as the previous books, and it’s only the scrappiness of our heroes that sees them through. The last quarter of the book is full of blood, death, tragedy, and mind-blowing revelations. Unfortunately, if you haven’t read the first two books, these may not have the same impact. You could still follow the story well enough if you haven’t read them. As with previous books, the story didn’t head the way I was expecting it to. The surprises are what kept the pages turning despite the slower pace.