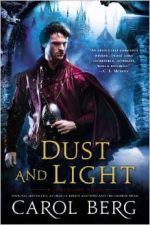 But it is while drawing the dead that Lucian begins to uncover abilities he thought he’d lost, and as a result the past begins to unfold a narrative that is much more complicated than he anticipated.

Carol Berg’s DUST AND LIGHT (Amazon) is an engrossing book, full of intrigue, magic, and fascinating characters. Told in Lucian’s first-person narrative, we come to quickly understand that the insular world he’s accustomed to is about to allow his downfall. Nothing goes right for him, and by three-quarters of the way through I remember hoping that he’d catch some kind of break, but the poor guy just gets ground down time and again. To his credit, Lucian pushes forward and doesn’t give up, isn’t afraid to ask the hard questions and search for the real answers, messy though they may be. Fortunately, he’s not without allies and the coroner Bastien, despite his rough exterior and ruthless ambition, proves resourceful and persistent.

They live in a city in the midst of war and famine, whose king has won the crown from his brother… or so he claims. The coroner Bastien and other regular citizens only know the hardscrabble life of those who live in the city’s slums. Bastien’s world is the necropolis, where he runs a small army who takes care of the dead for an entire city. The rest of the cast of characters, from Lucian’s only surviving family (his younger sister Juli), to the city’s people, the workers at the necropolis, and the pureblood community–they are all well drawn and give the story depth. And in fact many of them are fascinating. What is the Registry council’s motives for their treatment of Lucian? Who are these mysterious people of the slums who seem to have their own brand of magic? There are so many questions, and the answers aren’t always what you think they will be.

Berg’s prose feels dense at first, but if you’ve read her fantastic Collegia Magica series including THE SPIRIT LENS (Amazon), THE SOUL MIRROR (EBR Review), and THE DAEMON PRISM (EBR Review) then its rhythm will be familiar to you. I love how the style gives the reader a sense of the narrator and the era in which he lives. As in her Collegia Magica series, here also it’s the mystery that helps us understand more fully how the magic works, how the people live in the city, how the classes interact, and all the juicy tidbits world-building enthusiasts enjoy.

Lucian de Remeni-Masson is convinced it was his indiscretion that lead to the death of his entire family. A good, if slow, first act of his story.

Previous reviews here at EBR have noted how slowly things happen in Berg’s novels, that the pacing suffers despite the quality of characterization, prose, and setting. Fortunately, DUST AND LIGHT doesn’t suffer as horribly from this problem as in previous works. Even if it’s not as fast as we would be accustomed in other authors’ works, the story does move pretty quickly, much to the benefit of the narrative as a whole.

The novel ends with the knowledge that DUST AND LIGHT isn’t the end of Lucian’s story. Not yet. But despite this, the novel is a well-conceived act 1, where the truth is exposed and Lucian must decide what to do with his newfound knowledge. I look forward to the next installment.