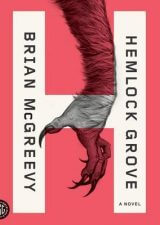 I’d been curious about HEMLOCK GROVE for a while. Netflix had made a series out of it. The series got mixed reviews, but was renewed for a second season. A lot of people have asked me if I’d read the book it was based on and if I’d also watched the first season. So when I was offered a review copy o the novel, I figured it was the perfect opportunity to satisfy that curiosity.

HEMLOCK GROVE (Amazon) by Brian McGreevy, turned out to be an interesting novel. It’s kinda a Twin Peaks murder mystery with a werewolf thrown in. A girl from the local high school (in the town of Hemlock Grove) is murdered. Brutally. Everyone is freaking out, so naturally they blame the new kid in school, Peter Rumancek. Peter and his mother are gypsies who had a trailer in Hemlock Grove left to them (kinda) by a dead relative. Peter can tell something is going on with the murder. It isn’t normal. Our other main character is Roman Godfrey, son of the deceased JR Godfrey whose company runs the town.

Now, upon comparison, I must say that the Netflix series did a great job of visually casting virtually every character (the only exception being Peter’s mother, who isn’t even close). And the series sticks extremely close to he source material. So close, in fact, that there are no real surprises from one version to the next. I suppose this shouldn’t come as a shock since McGreevy is part of the team for the show.

But here is the thing, the novel has way more personality than the show. The tone of the novel feels a lot like the reader is having a casual conversation about the supernatural and scientific events in the town of Hemlock Grove, while the show feels like it is trying desperately to shock the viewer. It makes the series a bit of a let-down. But it does serve to point out all the good things of the novel.

Let’s stay for a moment on the shock value of the show, and the show in general. There’s a lot of blood. Some naked. Swearing. I feel like the show wasn’t trying to be intelligent, but rather to present the viewer with all stereotypical horror tropes. Because they are safe. It was disappointing. But beyond that, much of the acting is pretty bad. Lines that have great personality in the novel are delivered in flat monotone. All that emotion from the novel is missing. All the character. The only thing saving the show for me is the fleshing out of side characters, and the STELLAR werewolf transformation. That transformation is awesome. In a way, the whole show was worth it for that one scene.

The novel fares much better than the show. Like I mentioned before, there is so much more personality in McGreevy’s novel. Character tone. Dialog. It’s all much better. The back-and-forth between Peter and Roman feels very natural in the novel. A lot more is left to the imagination. One thing I do wish, however, is that McGreevy wouldn’t have telegraphed who the killer was. It’s so painfully obvious.

HEMLOCK GROVE, overall is a pretty solid novel. It thankfully pulls us away from the “sexy monster” cliche and gives us actual monsters. The werewolf is actually a werewolf. The monsters apart from the werewolf (you had to know there would be others) are terrifying in their own way. I actually see a little bit of Dan Simmons’ CARRION COMFORT here when it comes to Roman Godfrey.

My main knock against the novel is that it doesn’t feel complete. There is a lot that happens that feels coincidental. During my read I kept thinking, “I wish this was explained a little more…” It’s not like HEMLOCK GROVE is a long novel. It could have been much longer and much more fleshed out.

Which brings me back to the show. While watching the show, I had the same feeling of incompleteness. While I was having a ton of my questions answered from the book, and the side characters were way more clear, I knew that the average viewer would be missing out on something. That something is all the emotion and actual character of the novel.

HEMLOCK GROVE brings a good werewolf horror story with science fiction in for kicks. Horror lovers should enjoy this novel quite a bit.

So what does all this lead me to? The show felt like I was being given all the gaps to the novel, all the while making me appreciate the unique tone of narrative McGreevy uses in the novel. I kinda feel like I have to recommend the TV series. Not because I liked it a lot, but because it feels like a true supplement to the novel. It makes the novel better.

But at the end of the day, I liked HEMLOCK GROVE on its own merits. I loved how it brought me a good werewolf horror story with some science fiction thrown in for kicks. And I think that horror lovers will enjoy this novel quite a bit.

And a link to the show:
Hemlock Grove: Season 1: Amazon