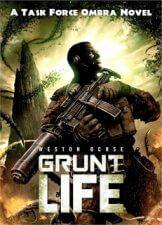 I’ve been on the look-out for novels similar to those of Larry Correia’s Monster Hunter series and Jonathan Maberry’s Joe Ledger novels. I love the mix of Military Thriller with SF/Fantasy/Whatever. It didn’t have to be magic, but I needed something that was contemporary, actiony, and with speculative elements in it.

Enter Weston Ochse’s GRUNT LIFE (Amazon). Ochse is best known these days for SEAL TEAM 666 (Amazon), and because of the movie deal that was announced, his name was already in my head when GRUNT LIFE arrived, courtesy of Solaris. I was still waiting for my copy of SEAL TEAM 666 to arrive in the mail, so I figured I’d give GRUNT LIFE a chance in the meantime.

The novel is told using the First Person PoV in the head of Benjamin Mason. He’s career military, but has reached the point where he is about to take his own life. This is the opening scene of the novel. It’s not white-knuckle, but rather sobering. Instead of dying (spoiler!), he is recruited to be part of a special military task force—Task Force OMBRA. Why? Because aliens have already begin invading—a bug-like race dubbed the Cray. OMBRA has been quietly dealing with their advance scouts for a while, but they fear the main invasion is coming.

The first half of the novel is about the members of the task force—all damaged in some way, shape and form—training and prepping. The second half is about the Cray invasion. It’s all very harsh and brutal.

Ochse has an excellent narrative voice. Line to line, paragraph to paragraph, page to page. It’s all extremely smooth. I never had to go back and reread a section for clarity—though I did reread sections because of how much I enjoyed a turn of phrase, or a character moment. The action—and there is a TON of it—is super clear and effortless to follow.

But what this novel really comes down to is the characters. The grunts. Without good characters, this novel would have failed utterly, no matter how well done the action was. Ochse does some very interesting things with his main character, Mason. Typically, the main character of a novel like this would be the good guy. The one that everyone likes. Everyone else has the real character flaws. Not so here. Mason is a bit of a jerk. He’s self-centered. He’s not the favorite of his squad. This gives huge opportunities to present the reader with character growth, and Ochse takes advantage of it.

Weston Ochse gives us a great example of why he's an awesome author in GRUNT LIFE. I'd put his stuff next to Correia and Maberry without hesitation.

The side characters are all interesting in their own ways, and it’s cool to have their backstories revealed as the book progresses. I’m not going to get into those detail much, since it’s best if you read them yourself in the novel. The main thing here is that all the characters have different politics and religious outlooks. It would have been real easy for Ochse to make these people one-note with respect to belief systems, but he didn’t. And I never felt like I was having the author’s personal views shoved onto me—something that has been a huge problem in fiction lately.

Honestly, I don’t have hardly anything negative to say. If there is one quibble, it’s that there are a few times where characters don’t quite react like they’ve been built up in the novel. You come to expect certain reactions, and then when those reactions don’t happen, it’s super jarring. But that’s it.

Weston Ochse is an awesome author. I put his stuff next to Correia and Maberry without hesitation. While I was curious about Ochse’s work before, now I’m excited to read it. All of it. It’s pretty easy to see that Ochse is one of the better authors for action SF out there, and GRUNT LIFE was an absolute blast to read.