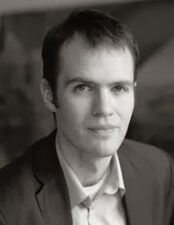 I met Max Gladstone at WorldCon in San Antonio. We were both waiting to be taken through or rehearsal of the Hugo Awards Ceremony, and I struck up a conversation when I realized who he was (that’s why we wear name badges, folks!). We’d given a positive review of his first novel, THREE PARTS DEAD, here at EBR which made things much better, of course. As it turned out, we got along extraordinarily well. Max is, without a doubt, one of the most genuine authors I’ve ever met. And (thank goodness) he is a terrific author, too. Max was nominated for the Campbell Award for Best New Author this last year, and I’m pretty sure he’ll be nominated again this coming year for WorldCon in London.

So, without further ado, here is our interview with Max Gladstone; author, Eldredge Knot wearer, and all-around awesome guy.

Elitist Book Reviews: It’s the Max Gladstone show! Introduce yourself to the readers and talk yourself up a bit. Why should everyone be reading your novels?

Max Gladstone: Hi! I write books and fence and occasionally get myself in trouble. I grew up reading Zelazny and Michael Crichton and Robin McKinley and and Terry Pratchett and Dorothy Dunnett and Garfield and Calvin and Hobbes, which left me with a very weird sense of humor, as well as a taste for brisk, tight plots and sharp characters.

Do you like books with zombie gods, boardroom necromancy, shapeshifting gargoyles, hive-mind police forces, human sacrifice, love, soul poker, giant lava serpents, and tense filial relationships? Of course you do! And that’s why you should be reading mine.

EBR: Your novels are an inspiring mix of genres, but I have to ask what is your favorite genre to read and why? OR which genre inspires you most?

MG: Hard question! I read widely, and I love surprises. Recently I’ve been on a science fiction / space opera kick, as a break from writing so much fantasy. But I just finished the new Scott Lynch book, which is awesome of course. I started Pynchon’s latest last night and that’s great so far. In terms of inspiration, New Wave SF has had the biggest influence on me, especially Zelazny, but that’s all amalgamated with historical adventure fiction and techno-thrillers and Sherlock Holmes to the point where I’m not sure you can say where anything starts with a certainty.

EBR: In your novels the cities–Alt Coulumb in THREE PARTS DEAD and Dresediel Lex in TWO SERPENTS RISE–play a large part of the story and you bring them alive to readers. Are either based on any city in particular?

MG: Alt Coulumb isn’t based on anywhere in particular, though I think it inhaled a lot of Northeastern Metropolis—Boston and New York especially—in its childhood. I wanted Dresediel Lex to feel different, so I reached out for cities that didn’t feel as if they belonged in New England. Los Angeles was the logical extreme, so I drew heavily off LA for TWO SERPENTS RISE.

EBR: Before your novels we haven’t seen many fantasy novels use the legal thriller genre’s elements as such an integral part of its storytelling. How did the idea for Craft and its legal aspects evolve?

MG: Magic and law are natural twins. Rules, principles, and precedent govern both, but will’s involved too, and raw force of personality. Much detailed magic in fantasy novels ultimately comes down to a question of who can phrase the most compelling argument as to why they should win. In Harry Potter and the Deathly Hallows, the final confrontation is basically an argument about a fine point of property law. Modern U.S. law features legally immortal immaterial persons, and if that’s not magic I have no idea what is.

EBR: Themes of sacrifice and religious belief are explored in detail in TWO SERPENTS RISE. Why were these themes important for you to write about?

MG: The modern world’s obviously out of balance, right? We have an enormous plastic island growing in the Pacific, the Aral Sea’s dried up, trans-Arctic ocean shipping has gone from science fiction to big business in about ten years. One natural reaction to that lack of balance is to embrace roots—turn back to the Good Old Days, the way things used to be. Problem is, whatever their advantages, the Good Old Days weren’t really that good. My nephew was born premature—he probably wouldn’t have survived a century ago, which is horrible to think. And that’s just talking medicine. The Good Old Days had shorter lifespans, rampant misogyny and anti-Semitism (and other forms of racism depending on which Days you choose), crippling global poverty, etc. etc. etc. I met a lot of small farmers when I lived in China, and not one that I spoke with wanted their children to follow in their footsteps. But rejecting the Good Old Days alternative, well, you’re back with the evaporated oceans and the dying forests and the diminishing fresh water supply, the world where they haven’t been able to make Inniskillin ice wine in five years because vinyard temperatures aren’t low enough. I wanted to tell a story about this conflict without giving anyone an easy answer.

Sacrifice was a good focal point for the conflict between these world systems, since it refuses easy answers. Human sacrifice seems repulsive to most folk with modern sensibilities, but within its traditional context human sacrifice was often the highest sacrament, and an honor to the one sacrificed, a way of elevating them to godhood. Then again, I doubt every prospective sacrifice appreciated the theological significance of their role as the knife was chestward-bound. (And of course, human sacrifice—or divine sacrifice, I suppose—is still celebrated and commemorated in the Christian tradition, especially if you’re into the ransom theory of atonement!)

EBR: We’re fairly confident you’ll win next year’s Campbell Award for best new author (alas not this year, despite a well-deserved nomination). Are you concerned about any specific competition?

MG: Thank you! It was an honor to be nominated last year, and I’d be honored for the same to happen again. Of course, it’d also be nice to win.

At this year’s Hugo Losers’ Party, Wes Chu said he was coming for me, so if I disappear in a bizarre ninja-related accident sometime around August 2014, drop him a line maybe.

EBR: You’re in a book store, and you notice some poor, lost soul trying to find something to read. What do you recommend? Obviously they’ve already read your own novels, so you can’t recommend those.

MG: Do they like science fiction? Lord of Light (Amazon).

Do they like fantasy? Robin McKinley’s The Hero and the Crown (Amazon), or Good Omens (Amazon).

Do they like science fiction or litfic, and do they have a LOT of time on their hands? Infinite Jest (Amazon).

EBR: What do we have to do to get our likeness’s killed off in your next novel? Bribes? Promises? Threats… not that we would ever do that… probably.

MG: Ask nicely. Also, I’m partial to whiskey. And cookies. Not at the same time. And no cookie-flavored whiskey, please. Gods. The very idea.

Sadly for this purpose, my next two books in the Craft Sequence are basically done. Though there is some proper mass murder in Book 4, so there’s room…

EBR: Any last words for the readers? And what can we expect next from you?

MG: The very next thing you’ll see from me: Choice of the Deathless, a choose-your-own-path type adventure game set in the world of the Craft Sequence. Be the necromantic lawyer you’ve always wanted to be! Alternate subtitle: business can be murder. More sorcery, more boardroom politics, more pinstriped suits, more demons, and more billable hours. Coming in December!

Beyond that, we have Full Fathom Five, the next book in the Craft Sequence, due out in July 2014. Offshore banking, artificial “gods”, slam poetry, golems, and the return of some familiar faces from Three Parts Dead and Two Serpents Rise. It’ll be fun. Also a bit heartwrenching.

Later in 2014 (at least that’s the plan!), I have a non-Craft Sequence sort of crazy space opera-like thing, and after that, well, let me hold some surprises for the future!

This interview was conducted for Elitist Book Reviews by Vanessa.