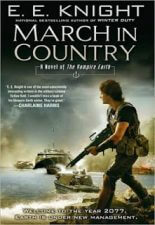 I recently received the latest Vampire Earth novel in the mail and realized I hadn’t yet reviewed MARCH IN COUNTRY (Amazon). It’s been a while since the novel came out–honestly the wait from that book to the newest edition, APPALACHIAN OVERTHROW (Amazon), has been a tough one to endure–but I thought it was important to get this out there for you.

E.E. Knight’s Vampire Earth series is one of the few series I actually get excited for anymore. I love the David Valentine character, and the side characters of the series–Ahn-Kha specifically. But what I really love is how Knight isn’t afraid of making life really tough on his main character. Friends and allies die. Valentine is literally and figuratively beaten over and over. He doesn’t just luck into his victories (usually). He earns them. He has honor. Valentine is an actual good guy at a time in literature where everyone is going the gritty anti-hero route (not that there’s anything wrong with that).

MARCH IN COUNTRY is the end of the story arc from FALL WITH HONOR (Amazon) and WINTER DUTY (EBR Review). Val and the rest are trying desperately to set up a new freehold, but seem to be thwarted at nearly every turn. These last few novels have been rather grim, but again, I love the resilience of Valentine.

Right up front, and the statute of limitations on this specific spoiler has long since gone by, Ahn-Kha is finally back. He’s a favorite of mine, and I’ve missed what he brings to the series. See, Ahn-Kha is who really shows us the humanity of our humans. Finally reunited, Val and Ahn-Kha go to try and talk the Golden Ones into relocating into the potential new freehold. Obviously it doesn’t all go to plan, but I never really felt the tension of the situation like I did in prior Vampire Earth novels.

MARCH IN COUNTRY is a good entry into Vampire Earth, but it isn't the best in the series. A good read, but a bit too long and with an ending that falls flat

MARCH IN COUNTRY is rather… flat. The ending isn’t unexpected in any way. The characters never seem like they are in any actual danger–not even the illusion of danger is really there. Don’t get me wrong, I liked the novel. I just didn’t like it as much as any of the prior novels in the series. This was Knight wrapping up the loose threads in preparation for the next part of the story. The quality of writing is good as usual. Val and Ahn-Kha are great, and their interaction is what made the book work for me. But in all honesty, this could have been told in a novella or a couple short stories.

MARCH ON COUNTRY is a good entry into the Vampire Earth series, but it isn’t the best entry. I’m anxious to see how APPALACHIAN OVERTHROW is considering it is a pure Ahn-Kha novel.