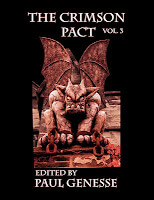 I have an awesome boss.  Well, all of us are pretty cool here at EBR, but Mr. Steve is a class act.  He’s smart, he’s debonaire, he’s… what’s that? Why all the sycophantic flattery?  It doesn’t even sound like I’m talking to you? Dang. Well, here’s the thing.  You might have noticed the title of this book review already, and maybe even more than that you might remember the fact that Mr. Steve was going to have another short story in this anthology. Yeah. Well, his story rocked, but… um… wow, I better just get into it.

THE CRIMSON PACT, VOL. 3 (Amazon), edited by Paul Genesse, is the third anthology of short stories that are all based off of the ideas developed by the Crimson Pact mythos introduced in his own story from the first anthology.  Generally speaking, a horde of demons has broken through some kind of inter-dimensional portal and been scattered across the veritable multi-verse and a brotherhood of knights and volunteers, the Crimson Pact, pursues them out into the eternities through a plethora of fantasy, sci-fi, steampunk, horror, urban fantasy, and just about any other story genre that is possible (well, I don’t know if I’ve seen a romance yet…).  In general, it’s been a fairly fun ride so far, with a bit of everything thrown into the mix.

I had several favorites this time around.

“That Which We Fear” by Larry Correia and Steve Diamond: More Diego Santos and Lazarus Tombs. Nothing could have made me happier than to see this one as the first in the group. We get some great progression of the storyline surrounding not only Tombs and his missing kid but on Santos and his deadline on life as well. I loved this one. If anything, it was too short and might have felt a bit rushed, but it was just packed with goodness. This series totally deserves to be followed.

“The Ronin’s Mark” by Donald Darling: This one totally surprised me and made me really excited to get into the anthology. The kicker? A connection to another story in the anthology, which is exactly what I asked for in my review of Volume 2. Ha! The fairly unsympathetic main character, whom I don’t believe is ever named, is the demon-equivalent of a contract killer that fights with the inner struggle of becoming complacent in the human world while wading through combat and contracted operations that are just fun to read. The ending, I thought, was especially good.

In general, THE CRIMSON PACT has been a fairly fun ride so far, with a bit of everything thrown into the mix. Short stories on the main.

“Monsters on the Trail” by Patrick Tomlinson: This is the third entry in Tomlinson’s continuing story and was a definite step up from Volume 2. Izzy and her pet demon, Melicarius, play into the main plot a bit more this time, and help her de facto Aunt and boyfriend Jaws (both cops) find the killer of a priest, who turns out to be… you guessed it. A demon. Really enjoyable.

“A Contract Between Thieves” by Stephanie Lorée: This was easily my second favorite of the anthology. Feni agrees to help Raf, a long-time acquaintance, complete a contract after a game of cards. The result is a romp through an alchemist’s laboratory that neither of them will forget and one of them may not survive. Though it started a bit slow, there was a great sense of character and place and adventure in this one that was missing from so many of the other stories in the anthology. This story, placed near the end of the anthology, totally saved the day for me. Stephanie: You rock. I want more.

On the whole, I was less impressed with this volume than prior entries for two reasons. The first is that it’s so much shorter than the others.  This happened, from what I understand, because the volume was getting too big from the sheer number of stories that had to be contained within it, and instead of making the thing just massive, Genesse decided to split volume three into two volumes.  He pulled a Martin, so to speak–keeping some stories (characters) in this volume and saving other stories (characters) for the next volume. The second reason was the shift of the stories toward, in my opinion, the unfortunate. There’s always going to be a split in the stories that readers like in anthologies. Just the way it is. I just wish there had been more fun, more substance, and more interconnectivity. But I am being kind of picky.

I am totally looking forward to the fourth anthology, if for no other reasons than that I might be getting another Santos/Tombs story from the story-titans Correia and Diamond, and I am also expecting another Evil Library story from Sarah Kanning (woo-hoo!).