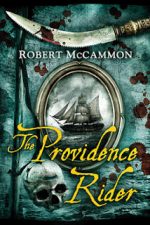 I a little ashamed to admit that I was late to the works of Robert McCammon (and honestly Horror in general). I mean, what kind of reader worth his weight in books hasn’t read McCammon? I was a member of that downtrodden and sad club until a few years ago when I found an excerpt on the Subterranean Press website of a novel titled MISTER SLAUGHTER (EBR Review). If that title doesn’t grab your attention, then you should probably go back to reading emasculated sparkly vampires.

That day changed the way I read Horror. It was a Alternate Historical Horror following a “Problem Solver”, Matthew Corbett as he embarked on a manhunt to find a vicious killer. There was nothing supernatural about the story other than the way it sucked me in and refused to let me go. I then went back and read SPEAKS THE NIGHTBIRD (Amazon) and THE QUEEN OF BEDLAM (Amazon). These novels cemented, to me, the notion that Robert McCammon not only was one of the best writers of Horror ever, but one of the best writers of any genre.

To my squealing delight, Subterranean Press then announced McCammon’s next Matthew Corbett novel, THE PROVIDENCE RIDER (Amazon). Naturally I ordered a signed copy. And then McCammon himself sent me an ARC. Every other book got tossed aside to read this one.

People are capable of more horror and evil than any monster. Matthew Corbett knows this, and he relives it every night in his dreams when he thinks about Tyranthus Slaughter. THE PROVIDENCE RIDER, first and foremost, is about Corbett coming to terms with his own role in life, and that he may have to lose pieces of himself in order to deal with the evil in the world. Without delving too far into spoilers, at the end of MISTER SLAUGHTER, Corbett is given an invitation to meet with his nemesis, Professor Fell. THE PROVIDENCE RIDER deals with this invitation.

McCammon’s latest starts out with a bang, literally. Explosions in his Manhattan neighborhood serve to implicate Corbett in their execution, and to goad him into accepting Fell’s invitation. Where MISTER SLAUGHTER spent the first chunk of the novel recapping the prior two novels in the series, THE PROVIDENCE RIDER does not. You should absolutely not read this as your first Matthew Corbett novel. Do yourself a favor and start from the beginning, SPEAKS THE NIGHTBIRD.

The very first thing that struck me was just how natural and smooth the writing was. Right from the opening chapter, I distinctly remember thinking, “McCammon makes this all seem so easy!” In some places it is a stream of consciousness that feels natural. In others the writing is more coy and teasing. The horror and the humor walk hand-in-hand as each page is turned.

I absolutely loved Corbett’s character progression. THE PROVIDENCE RIDER is the novel that really hardens Corbett into the man I think he must become to deal with Professor Fell. Corbett is slowly accepting that he may have to cross the line to take down Fell. I was a bit worried about the mopey beginnings of the novel, but Matthew comes out of it strongly.

THE PROVIDENCE RIDER is breathless in its pacing. So breathless that I wish it would have slowed down just a bit to let me soak it in.

Villains. A McCammon novel would be nothing without its villains. Professor Fell, of course, is one of the main ones–and he is AMAZING–but the side villains make the novel breathe. Some are pure evil. Some are very human and are more antagonists than villains. Others… others leave you with a dozen questions for ever answer. The varying shades of gray and the hidden motivations make this cast incredible.

All this being said, I had one major complaint. The book was too short. I mean this both in the way of “It was too short! I could have read forever!” and “This really could have been expanded to lend to the tension of the situation.” This novel is just setting the stage for future novels, but I would have loved for the last half of the novel to have been double the size it currently is. The setting there (no spoilers!) was soooo fascinating that I was begging for more and more… and then it was over. Like many of the villains, I was left with a thousand questions. So my only complaint is the length?

Yep. That’s it. THE PROVIDENCE RIDER is breathless in its pacing. So breathless that I wish it would have slowed down just a bit to let me soak it in.

THE PROVIDENCE RIDER is a stellar entry into the Matthew Corbett series and is an example of a tight and focused Horror story by one of the best authors in the business.

What are you waiting for? Read McCammon! Read this series!