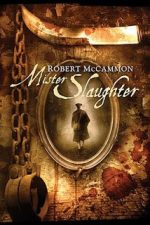 Robert McCammon is probably best known for his Horror novels. Some of his best work, however, is in the genre of Historical Fiction. Hopefully you have read his two previous novels involving the character Matthew Corbett, SPEAKS THE NIGHTBIRD (Amazon) and THE QUEEN OF BEDLAM (Amazon). If not, you have been missing out. The novels take place 1699 (and progress over the following years) in colonial America. McCammon’s newest Matthew Corbett novel, MISTER SLAUGHTER (Amazon) — such a great title — was released earlier this year by Subterranean Press.

MISTER SLAUGHTER, at its core, is a manhunt story… a very good manhunt story. Our PoV, Corbett, is an understudy problem-solver to Hudson Greathouse. They are given a job of escorting a prisoner, Tyranthus Slaughter, to a boat bound for England where Slaughter will stand trial for several murders. It should come as no surprise that Slaughter escapes, and a manhunt ensues. The reasons for the escape are better left to your reading discovery.

There is a misconception that Historical Fiction must be slow-paced, and riddled with pages upon pages of historical exposition. This is probably why we mostly avoid the genre. McCammon doesn’t do this. To some, this will come as a welcome relief (yup, we include ourselves in this camp). To others, however, the lack of a history lesson will turn them off (weirdos). McCammon admits that his novels aren’t 100% historically accurate, and that he blends several decades of colonial progress into just a few years. He does it to tell a more compelling story, and to keep the pacing at full-throttle.

Now, it should be noted that MISTER SLAUGHTER is about half the size of each of the two previous novels in the series. This does two things. First, it prevents the novel from getting bogged down in historical data. Secondly, it narrows the focus of the novel. MISTER SLAUGHTER trims out all the filler material that sometimes bogged down the prior entries, and focuses on the character growth of Corbett. We see a dramatic shift in his attitude, and he is set up for some potentially fantastic future stories.

There is some pretty violent scenes in this novel, true to McCammon’s horror roots. They often come out of nowhere, and are sufficiently shocking and brutal, yet amazingly written, and perfectly in character for those performing the acts. The first quarter of the book deals with Corbett dealing with the after effects of the prior novel, and the attitude that they have given him. The rest of the novel deals with the manhunt of Slaughter. Towards the end of the novel, a large set of events transpire that link this novel to the events and history of the prior volumes, and set us up for awesome future novels.

MISTER SLAUGHTER is an adventure/manhunt story in a historical setting and McCammon is a great writer.

Now, we know what you are thinking. Can you read this novel without picking up the large prior novels? Absolutely. We certainly recommend you read the other two, as they are fantastic reads, but McCammon has a way of clearly and succinctly describing events of the prior novels so that the reader doesn’t feel lost. It also doesn’t hurt that this is a fairly stand-alone story. If you go this route, you’ll probably want to go buy the other two novels as soon as you finish this one.

Did we have any issues? Of course. A part nearing the final pages of the novel felt very convenient/coincidental. There were sections where it felt just a bit too streamlined. There are anachronisms. The first quarter of the novel doesn’t seem like it meshes 100% with the remainder of the novel (with the previous novels, yes, but not the current one). But really, these are pretty minor complaints, and didn’t take away any significant enjoyment.

MISTER SLAUGHTER is a streamlined (clocks in at around 450 pages–that really is streamlined for McCammon) adventure/manhunt story in a historical setting. We were reminded of Thomas Harris’ Hannibal Lector stories, and a little Sweeney Todd, which should give you a fairly good idea about the tone and pacing of McCammon’s latest. You should hop over to Subterranean Press and buy a copy–they are selling MISTER SLAUGHTER at the normal hardback price. With it being such a great read, not to mention the top-notch quality of printing and art that Sub. Press puts out, its $25 is well worth the price.

Or, you can go grab it directly from Subterranean Press