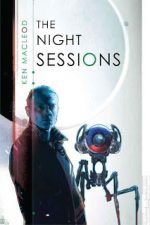 Occasionally I read the back of a book and an idea grabs me.  Honestly that’s what I love about SFF books.  There are tons of great ideas out there and I love when an author plays with one and lets me tag along for the ride.  The idea of personal incorporation in the Unincorporated Series was one such idea.  China Miéville’s works are so jam-packed with ideas that he often tosses a few of them out on a single page just to toy with your mind.  I read the back cover of THE NIGHT SESSIONS by Ken MacLeod (Amazon) and the only thing I remembered from it was “What if robots found religion?”

Holy Crap! Wow! What an idea! What a great, big, wonderful, let’s explore this and all of its ramifications, kind of idea!  I was hooked.  I needed to read this book right away.

Sadly the book was not all about robots finding religion.  It was a police procedural dealing with a murder of a religious leader in a future where robots are common and all is not as it seems (I’ll detail the plot a little better later on).  I was kind of bummed.  I was hoping for something a bit deeper that dealt with the big questions.

Happily, it was a fun police procedural book of the near future that happened to have robots finding religion in it.  Let’s deal with the happily part, OK?

Here’s the plot synopsis from amazon.  A bishop is dead. As Detective Inspector Adam Ferguson picks through the rubble of the tiny church, he discovers that it was deliberately bombed. That it’s a terrorist act is soon beyond doubt. It’s been a long time since anyone saw anything like this. Terrorism is history…. After the Middle East wars and the rising sea levels—after Armageddon and the Flood—came the Great Rejection. The first Enlightenment separated church from state. The Second Enlightenment has separated religion from politics. In this enlightened age there’s no persecution, but the millions who still believe and worship are a marginal and mistrusted minority. Now someone is killing them. At first, suspicion falls on atheists more militant than the secular authorities. But when the target list expands to include the godless, it becomes evident that something very old has risen from the ashes. Old and very, very dangerous…

There’s really even a lot more going on than this.  Part of the reason I enjoyed this book so much was the near-future world that MacLeod paints for us here.  The technology is beyond what we have, but not unbelievable. I wanted some of the high tech gizmos they have here.  I enjoyed seeing the tiny changes and not so tiny as well.  For me–not gonna lie to you–the fact that Detective Ferguson has a robot partner was a big reason I enjoyed the book.  Just enough Science Fiction to keep me going through the detective novel.

MacLeod likes to take big ideas and twist them around a bit. THE NIGHT SESSIONS is great example of this author's ability to do just that.

This book is about the same size as the Restoration Game, MacLeod’s previous novel published last year.  Where that book counted on the final twist at the end to really grab you by the throat, this book unravels at a much more even pace.  I enjoyed reading this book straight through to the end.  It may not have the punch at the end, but the overall reading experience was for me a bit better.

As for the religious aspect of the book, well, I’ve been thinking how to write that part of the review for awhile.

There are characters in the book who have strong feelings about religion, both good and bad.  It’s a world where religion is generally frowned on and ignored, and it seemed to me for the most part that people who believed in religion were kind of mocked.  I’m a very religious person myself and I could see how this type of thing could offend.  As for me, I decided to just let it go.  It’s a made up world (no matter how near future it is, there is still some leeway taken).  I’ve just come to visit the world and enjoy myself.  Still, I thought you might want to know.

Overall I thought it was a fun read.  MacLeod seems to be churning these things out.  I’m anxious to see what big idea he tackles next.