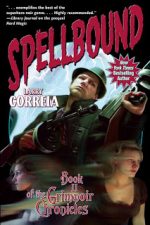 If you are a fan of Larry Correia‘s work, you’ve had a sweet year. MONSTER HUNTER ALPHA (EBR Review). DEAD SIX (EBR Review). HARD MAGIC (EBR Review). Yeah… that’s some good reading. You know from my reviews that I have liked all of these books. But of all of them, HARD MAGIC is the one that grabbed my attention. It marked the start of a terrific Alternate History Urban Fantasy Dieselpunk Science Fiction Fantasy novel. For the sake of having a usable category, I call it Urban Fantasy.

The second book in the Grimnoir Chronicles, SPELLBOUND (Amazon), is out, and it has everything good from the first book plus even more awesomeness. This is my favorite series by Correia. Period. Look, I love his other works, but this alternate take on 1930’s USA is freaking great.

Following up on the crazy events on book 1 (in other words, go buy book one now and stop reading this review), all (mostly) of the main characters are back. No one really believes that Faye is as powerful as she is, or that she accomplished what she did in the first book. All of the main people in the government are pointing fingers at the Grimnoir knights and saying how dangerous they are (think Mutant Registration Act from X-Men), and they seem to be proven right when the President of the US is nearly assassinated. The crime is pinned on the knights, and things go from bad to worse.

Here is what impresses me about Larry Correia: he is always trying to get better. His books sell well and entertain a huge number of people. But even he knows that he had issues in his early books. There would be pacing problems here and there, and often the female characters needed a bit more depth. The mark of a good author is when that author looks at the fair critiques of his work and busts his butt to improve in those areas. Correia exemplifies this trait, and all you have to do is look at the insane difference in quality between MONSTER HUNTER INTERNATIONAL (EBR Review) and SPELLBOUND. Night and day, people. Night and day. And it’s not like MONSTER HUNTER INTERNATIONAL was a bad book. I thought it was great.

What I noticed in SPELLBOUND was how Correia was able to better control and juggle a large cast of characters. Even a step further; not just juggle them, but let them grow before the readers’ eyes. Both Faye and Sullivan are freaking awesome. The side characters have enough detail to carry the scenes from their PoV, but not so much to take away from the studs of the show.

I also feel like Correia’s plotting is better. He’s good at having a very defined focus for what he wants to accomplish in the novel. As a result, I never really felt like this book was the middle book in a series or purely setup. It has a life–and a vibrant one at that–of its own.

Do I even need to mention the action? I mean, really? The day Larry Correia stops writing awesome action sequences is the day I will recommend Dan Brown as the greatest ever (never going to happen). We’ve got giant monsters and freaking robots in SPELLBOUND. And a samurai. And more demons. Yeah.

The Grimnoir Chronicles has the best story, best characters and best writing of all of Larry Correia's novels. SPELLBOUND is Larry Correia's best book in his best series.

Now. There is one thing I want Correia to work on. He isn’t bad at it by any means, but when so many things are going right in a novel, even little things tend to stand out. I need more tragedy. When Correia puts it in, he does it pretty well (just look at the very end of ALPHA). But I feel like we don’t get it enough. There are a few good scenes in SPELLBOUND, but I feel like they came juuuuuuuuuust short. It’s like the difference between hitting a Triple vs a Home Run in a baseball game. Or a long pass play in football (American version) that goes for 60 yards… only to have the receiver tackled at the 1 yard line. Still great plays, but maaaaaannnn was it almost unbelievable. I don’t want it to seem like I’m bashing Correia here. I’m not. His emotionally charged scenes are pretty good, but Correia is right on the edge of absolutely killing it.

So, should you be reading this series? Well duh. In my opinion, the Grimnoir Chronicles has the best story, best characters and best writing of all of Larry Correia’s novels. SPELLBOUND is Larry Correia’s best book in his best series. I loved it.