Elitist Classic: A Fire Upon the Deep 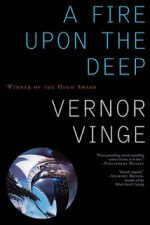 Confession time. I had never read A FIRE UPON THE DEEP (Amazon) until now. Please don’t think less of me. The thing is, and I’ve mentioned this before, I’m not a big SF reader. In general, I think most writers of SF are far more interested in showing how intelligent they are rather than telling a good story. It’s a personal opinion. Every now-and-then I find an SF novel that I really enjoy, but it just isn’t my thing. That’s why I let my reviewer, Shawn, handle most SF novels that are sent to me.

Anyway, back to my startling revelation. I’m sure tabloids are going crazy somewhere. I happened to mention to a publicist at Tor that I hadn’t read the Vernor Vinge classic, and he freaked out. A week later I had a copy in my PO Box from that same publicist. Likewise my good reviewer, Shawn, was a bit surprised at this glaring hole in my reading background. He had just sent me his review for Vinge’s THE CHILDREN OF THE SKY, and I thought, “Hmm. Maybe I should really read the original. See what all the fuss is about.” After all, A FIRE UPON THE DEEP is considered one of THE classics in SF.

Honestly I was prepared to be totally let down, but I pressed on so that I could give a newbie’s view on the novel.

First impression? I read the prologue and absolutely hated it. I wanted to put the book down and go read some James Barclay. But I had made promises, and I keep my promises at least 50% of the time.

The good news is that the next 80 pages were completely fascinating. The odd tone of the prologue vanished (later I came to understand it… still hate it, but understand it), and I was left discovering an enthralling universe filled with odd aliens and a very small cast of humans. The main story revolves around a civilization of humans unearthing an entity (the Blight) that spreads throughout the galaxy taking over nearly everything. I am paraphrasing there and not using the correct terms, but using those terms would make me have to describe the whole effing book so that it all makes sense to the reader who hasn’t experienced this novel.

A small ship with very few humans on board escapes the Blight and crashes on a medieval world inhabited by a race of creatures soon dubbed the Tines. The Tines are dog-like creatures that are separated into small packs of 3-6 (generally) individual “dogs” making up a single hive-mind personality. They are super intelligent, and are one of the most fascinating parts of this novel. In a way, the Tines and the world they live on make a good chunk of the novel almost a Fantasy novel rather than SF. These portions of the story focus on two human children, Jefri and Johanna, and a variety of Tines.

The other characters firmly ground the novel as SF. Ravna and Pham (along with two plant-like aliens) end up on a mission to save the two children and their ship which may have a way to destroy the Blight.

A FIRE UPON THE DEEP is a slow, dense Space Opera with awesome alien characters, sweet ideas, and accessible writing. It's absolutely an EBR Classic.

So here’s what I ended up liking about this novel. While it is SF, it doesn’t feel like it the entire time. As I mentioned before, there is a nice mixture of SF and a little fantasy mixed in here. This slight genre blending made the novel far more enjoyable than I expected. For some reason I was expecting to need multiple PhDs in physics and rocket-science to understand anything happening in the novel. Instead, the novel came across as fairly accessible. I felt the characters acted in believable ways. I thought the writing was clear. The concepts surrounding the way the universe is set up is really freaking awesome. I was really diggin’ the whole thing.

And then the novel got REALLY slow. After the first 100 pages, the novel was a lot of people sitting around punctuated by brief moments of “stuff happening”. It wasn’t a bad “slow”, but it did kill some of the excitement for me. Momentum faded away. I put the book down for a few days. Really, I just wanted something to happen. Something big. 2/3 of the way through the novel a lot of stuff did happen, but I wished it would have all come about a little sooner.

I realize I’m talking very vague here, and I apologize. A FIRE UPON THE DEEP is a complex novel. For me to explain all the details would 1) take for-freaking-ever, 2) be boring as heck, and 3) ruin a lot of the fun discovery. If you’ve already read this novel, you know what I’m saying. If you haven’t read the novel, then the best thing I can recommend is buying the book. The book lays it all out for you.

There is a lot of good here. The ending makes up for most of the extreme slowness of the middle of the novel. Everything is wrapped up a tad too neatly for my taste, but it was still cool to see the convergence of technologies in an anti-Prime Directive sort of way.

So did I like this book? Yeah, I actually did. Vinge is a great writer. His ideas are sweet. His alien characters are awesome (his human ones are solid, but not amazing). It’s a slow, dense Space Opera. If you are into Alastair Reynolds, you’ll dig Vinge a lot I think. I liked the overall accessibility of the novel. Yes, I liked this book quite a bit. From a guy who doesn’t really like SF that much, I think this says a lot. I can easily see why people who love SF–and thus my reviewer, Shawn–are absolutely entranced by this novel. I’ll definitely read the prequel and sequel(s). I’d totally consider this an Elitist Classic and put it in the Science Fiction 201 level, and I’d recommend it to all you SF lovers who have somehow missed it until now.