Review: How to Live Safely In a Science Fictional Universe 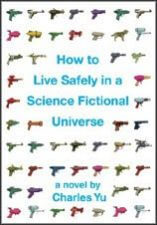 I read about this book awhile ago. It was a story about a time machine repairman, who owns a non-existent dog. It also happens that his mom is stuck in a one-hour time loop, living the same Sunday dinner over and over and over. Also the protagonist’s (who just happens to be named Charles Yu just like the author) dad may have invented time travel. Oh, and Charles also killed his future self, so he’s wondering when his present will catch up to the past, where he gets shot. I read that premise and thought, wow, that sounds like a book full of great fun ideas. It looked like a fun book. I need to read that.

Turns out the story, HOW TO LIVE SAFELY IN A SCIENCE FICTIONAL UNIVERSE (Amazon) is really about none of those things. It was a more intimate personal story about the repairman, Charles, and his relationship with his father. I’d be OK with that too, if it worked. But it didn’t. I read through the whole thing waiting for it to take off, waiting for something, anything to happen. Maybe the fun Science Fiction stuff would start happening and all kinds of wacky adventures would follow. Nope. Maybe the characters will leap off the page and I’ll grow to love them and cry at the end when they reunite, or die or save the world or whatever (I’m not gonna give away the ending to you guys. There’s a special punishment in the afterlife for people who give away endings). Wrong again. Instead the book was full of great promise that never reached maturity.

The book was a conundrum by all accounts. It’s a short book, clocking in at a little under 250 pages, yet the author goes on as if he’s writing a 1000 page door-stopper. There were paragraphs that were literally two whole pages long and seemed to repeat the same thing over and over and over again. And then it would repeat what it had said. And then it would say the same thing that it just said again. And then it would say something and it turns out you already knew what the author was saying. You see what I’m doing here, repeating myself? Now you know what HOW TO LIVE SAFELY IN A SCIENCE FICTIONAL UNIVERSE. Except you don’t.

The other half of the book reads like stereo instructions. It was confusing to the point of total obscurity. Even with basics like how time travel works. There are plenty of books that at least give you an idea of how their theory of time travel works (for example, can you meet yourself and change your past, and if not, then why? Things like that). I’m really OK with a lot of SF mumbo jumbo to explain the quantum entanglement whatever you call it, but normally I also get a good explanation of what is happening. This book never did that. I don’t know if the book was even supposed to make sense or if there were a bunch of science words in there instead of “and then something sciencey happened to make it all work”. Actually come to think of it, I would have preferred that.

HOW TO LIVE SAFELY had some joyous moments, but on the whole it was a dud.

There were some moments of joy to be had in the book, no doubt about it. There are quite a few Star Wars and Star Trek references throughout to make me giggle. At one point the protagonist mentions a friend of his working on the Death Star and how nice the cafeteria is. Good stuff, right? Sadly those moments are few and far between. I was hoping for whimsy, something witty and clever. Instead the book was a dud. I didn’t care as much as I wanted, I didn’t laugh as often as I should have, and I was lost a whole lot more that was necessary.