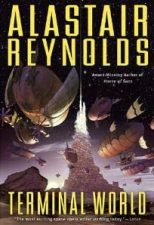 So, I don’t particularly care for science fiction. Call me a hypocrite, yes you may, but don’t be too harsh, because there may be some hope for me yet. In fact, you might have already heard of him. His name is Alastair Reynolds.

I don’t remember how I came across my first book from Mr. Reynolds or what possessed me to pick it up. Perhaps it was the fact that I really did (somewhere deep inside) like science fiction and wanted to find something good. Or maybe it was an impressive review that I found about one of his previous books. Then again, it could have been the contract he has with Gollancz, which speaks for ten books over the next ten years for £1m. Whoa. Regardless, I picked up HOUSE OF SUNS (Amazon) by him shortly thereafter and was far from disappointed.

TERMINAL WORLD (Amazon) is a standalone book set against the backdrop of a far-future earth where one of the largest population centers still around is called Spearpoint. It’s a miles-high inverted cone that spirals up into the atmosphere with no realizable purpose but to house several strata of technologies and peoples. Each of these technologies is held in check by the unknown workings of the “zones,” and affect in detail the lives of those living on Spearpoint’s outer surface. High above in the Celestial Levels, post-humans called Angels float on the thermals and currents. Those that descend into a lower zone quickly die. In Neon Heights, life is much like you’d expect from that in a modern city–cars, commuters, buildings agog–all familiar but for the sharp drop near the outer shelf. There are also zones where steam prevails, and others where it’s nothing but the wild-wild west. Crossing borders to some extent is permitted, though cause extreme discomfort, sickness, and sometimes death without the aid of “anti-zonal” medications. Electricity, steam, combustion, guns, lasers, they all work in their requisite zones, but simply don’t in others. Really cool ideas all.

In amongst this network of awesome futuristic backdrop works Quillon, an angel that was secretly modified years ago to infiltrate the lower zones but ultimately went AWOL. Unfortunately, a pack of angels has finally found him. Luckily though they don’t want to give him a lobotomy. There are, however, other more sinister angels who do. For the technology to modify their bodies has somehow gone missing, and within Quillon’s brain lies the only copy of the plan.

Then it’s time for Chapter 2.

One of the things that Alastair Reynolds has done in both of his books that I’ve read is give me realistic, intricate, engaging characters and put them into a world that is mind-blowingly new and complete. Science fiction is all about the ideas: the original, the unfamiliar, the enlightening. He does all this and more with grand panache, and even gives us a great story to go with it. Bad guys, betrayals, and blimps. Oh my!

In the end, I say, “READ ALASTAIR REYNOLDS!” in a mighty, booming voice that will ring through your head until you do. Including TERMINAL WORLD.

Despite how dense this book was, I found myself tearing through the pages. His prose is easy to read, his ideas easy to understand, and the book incredibly easy to get drawn into. On the whole, I enjoyed it (can you tell?), though there were parts that got a bit slow. A large portion near the middle of the book kind of felt like a “world-building” section, though props to him for giving it to us as an integral part of the story and not as pages and pages of exposition (as so much science fiction does). He helps us to feel the world, to take a stake in it, to understand how these people live and survive on a hostile, heat-ravaged planet, both inside and outside the security of the cities. He unfolds their history and makes things terrifying and awesome to them, feel terrifying and awesome to us. My only real complaint with the book was about the ending. Guess I expected a bit more action. Even though the ending was satisfying and uplifting and full of promise for our characters…a few more explosions or something would have been kind of cool.