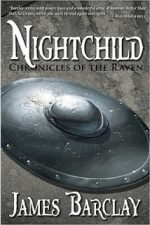 NIGHTCHILD (Amazon). So here we are, the third and final novel of The Chronicles of the Raven series by our friend James Barclay. So does it stay true to the prior novels? Does it elevate the series to new heights?

Easily. This is by far the best of the trilogy.

If you’ve been reading this series, you know what makes this series work. Fast-paced, bloody action. Battles and journeys of epic proportions. Grim tones amidst witty banter from, the stars of the series, the mercenary group The Raven. Saving the world. With NIGHTCHILD, Barclay had some heavy expectations to fill. How do you go bigger than the Dawnthief spell from the first novel, DAWNTHIEF? (EBR Review) How do you go bigger than a rift to another dimension full of dragons like we saw in NOONSHADE? (EBR Review) This is the trap that many authors could fall into.

With NIGHTCHILD, Barclay perfectly avoids the pitfall. Instead of going bigger, he goes personal (as we know, bigger isn’t always better…). The result is a much more character-driven novel, and in our opinion, a much more powerful reading experience.

The Chronicles of the Raven should be on the shelves of every reader of Heroic Fantasy and Sword and Sorcery, and NIGHTCHILD brilliantly concludes the trilogy.

The Raven have changed. They are older. They have families. They have responsibilities. Do they need to save the world again? Well yeah, it wouldn’t be a Barclay novel without our heroes saving the world. But NIGHTCHILD is so much more than that cliché. The world saving bit is almost a secondary issue. The real plot of the story for The Raven is racing to prevent Denser and Erienne’s daughter, Lyanna from being killed. In theme with the more personal nature of the novel, the huge-scale battles of the prior novels have been condensed and focused on The Raven to wonderful effect.

Why is NIGHTCHILD so powerful? In this novel we get to see that our “Heroes” are not “Super Heroes.” We see how strained their relationships can become, and how vulnerable they really are. We witness the tough personal and moral choices that they have to make that will inevitably have serious consequences. We, as readers, get to experience the benefits and drawbacks that loyalty brings…as well as the demands it makes. By the end of the novel, you will be satisfied and thrilled. However, in true James Barclay fashion, you will also feel saddened at what The Raven had to sacrifice.

Just imagine how his other books will be.

Look forward to an interview with James Barclay later on here at Elitist Book Reviews. The guy is a complete class-act.