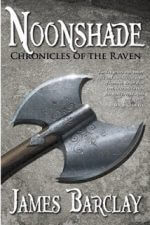 Remember that guy, James Barclay, whose book DAWNTHIEF (EBR Review) we reviewed a few weeks ago? If you don’t remember, shame on you! That first novel was one of the higher quality novels we had read all year, so we had some fairly high expectations for NOONSHADE. Do we ever not?

The story of NOONSHADE picks up, literally, minutes after the first book, DAWNTHIEF, ends and throws us right back into the exploits of the mercenary band, The Raven. In the first few pages we are given a brief, “Hey, look! There’s a big-A hole in the sky as a consequence for saving the world in a dangerous way in the last book.” summary. Then BAM! (Emeril, not only are we more attractive, we even say your catchphrase better. Eat your heart out.) we get right into the events of the current book. Salvation brings its own can of worms in this worms. Actually it isn’t a can of worms, so much, as a rift in the sky through which all manner of destruction can manifest. By, “all manner of destruction” we mean interdimensional dragons that want nothing more than to obliterate everything, and kick your dog. Twice.

Yes we know what you are thinking, its not an entirely unique premise, and if it sounds familiar, it should. The creation of new problems by the method of solving the old is a well used mechanism for fantasy stories. However Barclay takes this trope and does it right (unlike one of the members of the authors-who-shall-not-be-named club).

Hold on you say? Dragons? Yes well, let’s address that. One of the first things that astonished us both, while reading NOONSHADE, was that within the first few pages there are elves, a dragon, (actually more than one), and they weren’t obtrusive in the slightest. In fact they are really cool.

A very good friend of ours, you may have heard of him, Brandon Sanderson, once wrote an article entitled Kill the Elves. While Dark Fantasy (AKA Gritty or ‘Realistic’ Fantasy) is certainly trendy right now (We aren’t afraid to say, especially to all you mainstream critics, that we love this trend.), it has been around for decades but has, previously, been overshadowed by the more traditional High Fantasy. You know the fantasy we all grew up with that had Dwarves, Elves, Mages, dragons, etc.

Well, back to the point at hand… In the Kill the Elves article Brandon Sanderson talks about how the time of these fantasy tropes has passed, and the genre is in search of the new successor to the throne. We agree with him, and not just because he is our friend.

However, James Barclay shows us in his Chronicles of The Raven series that perhaps Brandon’s depiction of the death of the elves is perhaps not always correct. For us to be saying this means that these elves were done very well. Its not about their pointy ears, or hoidy-toidy attitudes (we are the ones that are supposed to have that attitude), or even their ubiquitous racism. They are characters just like everyone else.

This leads us to perhaps the most important part of our review. While completely full of action, (Seriously, we were well sated on the action aspect of this novel.) James didn’t forget that Fantasy stories are about the characters and character growth. The emotions, ambitions, concerns, and thoughts of each of the characters are as tangible to us as the book in our hands. We know and understand what each of the characters are feeling. No small accomplishment in a book with dragons, eh? Oh speaking of dragons, as if making elves cool again wasn’t enough, James does it with the dragons who are strong characters themselves!

Multiple plots are detailed and woven together in an incredible fashion. The story yanked us along and we loved every minute of it–all the way up to, and including, the satisfying conclusion. At this time we would like to remind you all that this is, in fact, the second book of a trilogy. So let us repeat this. There is a satisfying conclusion. Let there be much rejoicing in the land!

Typically when you read the middle novel of any series (especially trilogies), the first half of the book is telling you what happened in book 1 while the last half tells you what will be important in book 3. It gets real old, real quick, and we figure that is why many authors are getting away from traditional trilogy set-ups. You know why Barclay is swiftly becoming one of our favs? His novel doesn’t suffer “middle-book syndrome.” It doesn’t have a stand-alone feel by any means, but it certainly doesn’t succeed on the coat-tails of it’s predecessor and the promise of it’s successor.

We’ll admit that we worried about how this book would read. Would the style get old? Would NOONSHADE suffer the 2nd Book Slump?

The answer to all those questions is a resounding, “No!”

In NOONSHADE, we are given everything that made DAWNTHIEF incredible, with added layers of detail of the world and its characters. We are positively thrilled that we finally have these novels here in the US! Seriously, if Barclay’s next novels continue to be this enjoyable, we may have found the guy that tops our Heroic Fantasy list of favorite authors. NOONSHADE bears a cover-quote from the late and great David Gemmell. It is one of the few novels that actually deserves those words of praise from the Legend.

Whatever it is that draws us all to stories like NOONSHADE about the exploits of mercenary bands, James Barclay knows what it is.

Whatever it is that draws us all to stories about the exploits of mercenary bands, James Barclay knows what it is. This a group of mercenaries that we don’t see ourselves tiring of. Go buy Barclay’s US releases of his novels RIGHT NOW!

James Barclay’s Chronicles of the Raven sets the standard for Sword and Sorcery Fantasy. Anyone who is writing about a group of mercenaries needs to read these books and ask themselves, if they can do it half as well.