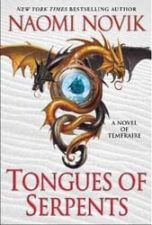 Captain Laurence, who became Temeraire’s rider by happenstance, has spent his military career playing by the book; but Temeraire, unlike most dragons of the British Air Corps, is very intelligent and has his own ideas about how things should be done. This combination makes for some fine adventures that take place from France to Africa clear to Temeraire’s country of origin, China. Novik follows the Napoleonic Wars pretty faithfully in the first books, but then the series veers from history when Napoleon attempts to invade England.
Read the rest of this review »

After the disappointment of the so-so TONGUES OF SERPENTS (EBR Review), it was a relief to see Naomi Novik back in form with CRUCIBLE OF GOLD (Amazon). I’m beginning to see the longer-range purpose of Novik’s series, and with several exciting scenes and more serious characterization, I have hope for the future.
Read the rest of this review »