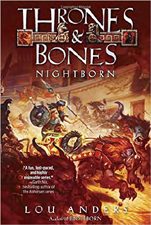 Karn is a gamer; his favorite game is Thrones and Bones (after which the series is named). When his best friend Thianna–half giant, half human–is kidnapped, he’s tasked by the dragon Orm to find her. Easier said than done, for he must travel far from his rural home to the city of Castlebriar, deal with duplicitous elves, and solve riddles. Thianna was on a quest to find a horn, much like the one they discovered in book one, FROSTBORN (Amazon)–these horns make it so the user can speak with and coerce magical beasts. And Orm isn’t the only one who wants to find the second horn.

Desstra is a dark elf, training to be a member of the Underhanded, a group of elite fighters. When an important test goes awry, she’s sent on a mission to prove she’s worthy. Part of that mission involves tricking Karn into thinking she’s something she isn’t. Because if she can’t get the horn before Karn does, then she will be outcast from the only home she’s ever known–even if she does think dark elves aren’t very nice.
Read the rest of this review »