The Paper Menagerie and Other Stories 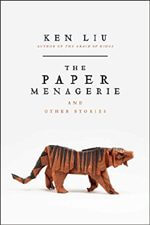 Before Ken Liu wrote novels like THE GRACE OF KINGS (EBR Review), he wrote short stories, several of which won notable awards. THE PAPER MENAGERIE AND OTHER STORIES is a compilation of not only his award-winning shorts, but also some of his own favorites, including one not previously published.

They are stories filled with emotion, creativity, and beautiful prose. And all will require a degree of contemplation–these are not simple stories, as they are filled with multiple layers of character, situation, and setting. Each is worth thinking about what Liu is trying to say. It’s these very qualities that makes this anthology worth reading.
Read the rest of this review »

The Grace of Kings

THE GRACE OF KINGS (Amazon) by Ken Liu was a pure pleasure to read. Dubbed the “Wuxia GAME OF THRONES” by Wesley Chu, this debut novel is a grand adventure that speaks of Liu’s considerable talent. It’s the type of novel capable of bridging the gap between “pulp” and “literature,” a story that is equal parts fun and cerebral. THE GRACE OF KINGS is an early contender for best fantasy of 2015 and when awards season rolls around again I anticipate it garnering plenty of nominations.

For those unaware of Wuxia, it is a broad genre of Chinese fiction concerning the adventures of martial artists in ancient China. Some notable examples of the tradition include films such as CROUCHING TIGER, HIDDEN DRAGON (Amazon) and HERO (Amazon), and games such as Bioware’s JADE EMPIRE (Amazon), which is one of my favorite RPGs of all time. I suspect/hope that THE GRACE OF KINGS will further raise awareness of the genre.

Wily, charming Kuni Garu, a bandit, and stern, fearless Mata Zyndu, the son of a deposed duke, seem like polar opposites. Yet, in the uprising against the emperor, the two quickly become the best of friends after a series of adventures fighting against vast conscripted armies, silk-draped airships, and shape-shifting gods. Once the emperor has been overthrown, however, they each find themselves the leader of separate factions—two sides with very different ideas about how the world should be run and the meaning of justice.

Fans of intrigue, intimate plots, and action will find a new series to embrace in the Dandelion Dynasty.
Read the rest of this review »