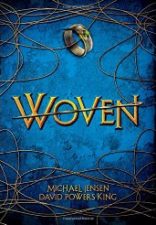 Nels can’t remember a time when he didn’t want to be a knight. Unfortunately, despite his aptitude for combat and a desire to help others, Nels’ mother won’t let him apply to become a squire. So far he’s listened to his mother. But this year she’ll be gone during the festival and decides to sneak out of the house while she’s gone.

By the end of the night he wishes he’d listened to his mother. Everything goes wrong. He gets in a fight with a real knight. Offends the princess. And is found by the very man who wants to see him dead.

Princess Tyra is in love with Knight Arek. Sure he’s a little pompous, but the idea of governing the kingdom scares her, and she’d rather hand it over to a capable husband. She just needs to convince her father that Arek is the best choice. Things were going well until Arek gets in a fight with peasant boy at the festival. When the boy wins he demands his prize–a kiss from the princess–and she refuses, she’d been expecting to kiss Arek as the winner. But later that same boy comes to haunt her–as a ghost.
Read the rest of this review »