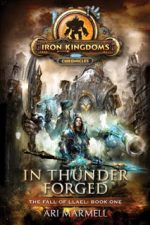 Posted: July 20, 2012 by Nickolas in Books We Like Meta: Ari Marmell, Fantasy 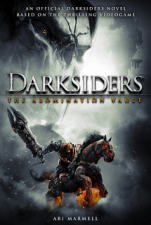 I’m one of those guys that plays video games for the story. I much prefer a solid campaign over online multiplayer any day of the week. For this reason I am a huge advocate of tie-in fiction. I love to delve deeper into characters and events that are barely touched upon while playing the game. When I caught word of a prequel novel to the Darksiders franchise from THQ my interest was piqued. When I saw that it would be penned by Ari Marmell, author of the YA Widdershins series, I was sold. May I present you, DARKSIDERS: THE ABOMINATION VAULT (Amazon).

There exists a vault containing weapons of unimaginable power. The vault remains a legacy of the atrocities committed by the Nephilim. Of the four Horsemen, the last surviving Nephilim and protectors of the Balance, only Death is aware of its being. Now an unknown enemy strikes from the shadows, intent on acquiring the weapons stored within the vault and unleashing a wave of destruction across Creation. Only Death, with the assistance of his younger brother War, has the ability to prevent the coming catastrophe.
Read the rest of this review »

Well it took me far longer than it should have, but I have now finished THIEF’S COVENANT by Ari Marmell. THIEF’S COVENANT (Amazon) is a short (and satisfyingly) breezy read, but finishing up final projects for school has really cut into my reading time. I am pleased to say that I have been having relatively good luck with my reading endeavors lately, and the debut of Widdershins does not disappoint. In a YA market saturated with dystopian settings it’s nice to read one set in a fantasy setting.

Meet Adrienne Satti, also known as Widdershins. Street urchin, turned aristocrat, turned thief, Widdershins has led a rough life. Orphaned at a young age, Widdershins has known both poverty and high class. Having returned to the shady alleys from whence she came, Widdershins has established herself as a daring thief but will her street smarts be enough to save her from the dark conspiracy brewing in the depths of Davillon?
Read the rest of this review »

Posted: August 29, 2011 by Vanessa in Books We Like Meta: Ari Marmell, Fantasy

If you enjoyed THE CONQUEROR’S SHADOW (EBR Review) by Ari Marmell, then THE GOBLIN CORPS (Amazon) is more of the same. Only sillier. I know, I didn’t believe it was possible, either, but just read the cover blurb: “The few. The proud. The obscene.” Yes, yes he went there.
Read the rest of this review »

Posted: September 15, 2010 by Vanessa in Books that are Mediocre Meta: Ari Marmell, Fantasy

Ari Marmell has been writing freelance for years, including short stories, co-authored shared-world fiction, and RPG manuals for Wizards of the Coast. THE CONQUEROR’S SHADOW (Amazon) is his first solo novel, and he attempts to shake things up, with a twist on the standard sword and sorcery.

But his sordid past catches up to him when bandits attempt to assault his daughter. However, this is no random attack, its very deliberateness to bring Corvis out of hiding, because he has something everyone would kill to get.
Read the rest of this review »