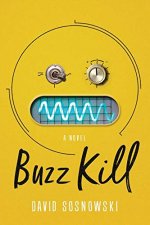 BUZZ KILL (Amazon) is a narrative journey without a destination. The journey itself is interesting as author David Sosnowski explores the ramifications of social media; hacking; AI; a networked world, and the unregulated power of corporations to pursue projects for profit. Pandora and George, the two POV characters, are sympathetic. But a weak final third of the novel leaves readers with too many loose character threads and an abrupt conclusion that significantly weakens the narrative.

BUZZ KILL follows Pandora, a home-schooled girl growing up in Alaska. With an especially expressive face and a deep interest in the why of everything, Pandora isn’t loving her transition to public high school. When a prank gets way, way, out of hand, Pandora’s punishment is to visit her grandmother, who has recently been moved to elder care. As Pandora’s visits turn from obligation to pleasure, she is forced to confront her grandmother’s inexorable descent into dementia. Determined that she won’t suffer the same fate, Pandora wants to find a way to use her considerable computer/hacking skills to make an AI that could help her consciousness live forever.

She finds her answer in George Jedson, a perviously homeless teen who now works for social media giant Quire. George is also an excellent hacker and coder, and uses his skills to hack into the self-driving car of VT Lemming, the CEO of Quire. VT, chagrined and impressed, offers George a job–developing an AI who can talk teens out of committing suicide. With the dawning awareness that he’s been handed an impossible task, George accepts help from Pandora, the daughter of his Quire psychologist. As they work (via text message) to create an AI named Buzz, George begins to spiral into intense anxiety about the project, ultimately leaving Pandora to make the final call–is their AI ready, and should she unleash it on the world?

Sosnowski’s novel oscillates between satire and sympathy, bouncing between George and the tech-will-save-the-world culture at Quire, and Pandora’s budding relationship with her grandmother. While this makes the satire a little gentler than it could be, it also allows for more character moments. Sosnowski’s prose is also well-crafted; where I struggled was mainly structural issues. Our two main POV characters don’t even have a hint of each other’s existence until almost half-way through the novel. Sosnowski is at his best when he writes about Pandora’s family relationships and perhaps it was this urge that made the book feel like it had a long, long runway before the central plot took off.

BUZZ KILL vacillates between being a family saga or a near-future parable about the dangers of AI. In the end it becomes neither.

The work Sosnowski does to make Pandora and George believable characters unravels in the weak last third of the book. When George gets sucked so far into his project that his own mind begins to unravel, he drops offline, having attempted suicide (although whether he was successful is ultimately unclear, at least to me). In place of George, Buzz begins to text Pandora. She chats with Buzz for months before realizing that it isn’t George. And well… nothing happens. Pandora doesn’t seem worried that George has been gone for months. Instead, she decides to set Buzz free into the world, leaving her budding romance/friendship with George completely at loose ends.

In an even more bizarre twist, once Pandora chooses to unleash Buzz, she doesn’t tell anyone. She just goes to a bar and gets drunk, in what seemed like a very adult decision, not a teen one. The final big reveal lacks weight because it lacks foreshadowing, or narrative space after the fact to see the consequences of the character’s actions.

BUZZ KILL vacillates between being a family saga or a near-future parable about the dangers of AI. In the end it becomes neither.