Review: To Be Taught, If Fortunate 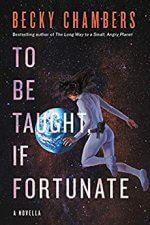 If you’ve been keeping up with our reviews (and frankly, who hasn’t?) you’ll know that we enjoyed Becky Chambers RECORD OF A SPACEBORN FEW (EBR Review) and we’re looking forward to happily reading along with where she takes the Wayfarers Series. In the meantime, we can gladly recommend her standalone novella, TO BE TAUGHT, IF FORTUNATE.

Set about 100 years in our future, Earth is in the throes of global warming, with autocrats and general instability making funding science for the sake of science–not to build a weapon or garner profits for a corporation–a near impossibility. Instead of despairing, a group of scientists crowd-fund a world-wide space program, with small donations from hundreds of thousands of people reaching for the stars. It’s beautiful and bold and tenuous, just like most great endeavors.

TO BE TAUGHT, IF FORTUNATE (Amazon) is written from the perspective of Ariadne O’Neill, engineer and astronaut. Ariadne and her three fellow crew members comprise the Lawki 6 mission, sent to four habitable exoplanets to… well, to science the heck out of things. As Ariadne says, “we live and breathe why” (pg 3). I’m by no means a scientist, but the ideas that Chambers plays with, including synthetic biology/genetic engineering to enable space travel were interesting and it’s clear she takes her science very seriously (in the ebook edition I read there’s a question and answer between Chambers and her mother, who is an astrobiology educator and her main consultant).

As the crew travels from exoplanet to exoplanet, they find the conditions of their mission evolving and discover that communications from Earth have been mysteriously and abruptly cut off. TO BE TAUGHT, IF FORTUNATE is both a record of their discoveries and a plea from Ariadne and the crew to the people of Earth for guidance.

Look, I realize that sounds sort of vague and cerebral. And while there’s plenty of science and big ideas in the novella, Chambers brings her signature ability to find the human heart at the center of it all. I was struck by Chambers’ description of Ariadne as she wakes up from ‘torpor’ (or hypersleep…or whatever you want to call it). It’s a familiar scene for anyone who’s into space books, but Chambers does an excellent job of making something that could be very clinical into something very visceral and specific.

The overarching narrative is driven by the movement from exoplanet to exoplanet as well as the mystery of the lost communications from earth. But the threads that pull the reader through are the joys and trials of scientific discovery including the ethical dilemmas as they visit new worlds and interact with the life they find there. That rhythm means that there are parts of the plot that involve waiting, or thinking, but there’s still a narrative pull through it all.

Idea focused writing often prioritizes ideas over character, but Chambers never forgets the human spirit at the center of science.

TO BE TAUGHT, IF FORTUNATE puts the reader explicitly in the position of someone who’s received this transmission, asking them to evaluate what Ariadne has written. Is Ariadne’s story compelling? Is what they have discovered “worth it?” What sort of personal and communal sacrifices should be made to further scientific exploration?

I suspect that the audience who will pick up these books will already be sympathetic to Ariadne’s plea for the importance of scientific discovery, but if they weren’t, Chambers makes a good case. Idea-forward/idea-focused writing can often prioritize ideas over character and plot but I thought that Chambers avoided most of these pitfalls and provided a moving and important call for doing science, never forgetting that at its center lies the human heart.