Review: The Library of the Unwritten 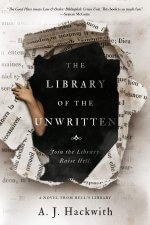 If you’re into books-about-books, A.J. Hackwith’s novel, THE LIBRARY OF THE UNWRITTEN (Amazon), explores the power of stories and imagination. If that sounds corny and sunshiny–DON’T PANIC. This novel is literally set in Hell; there’s plenty of stabby demons, and betrayals, and grumpy librarians who need more tea and less talking. While the overarching drive of the novel is a race between Hell and Heaven to solve a mystery, Hackwith’s characters and their interactions take center stage.

Claire is Hell’s Librarian, the keeper of the Unwritten Wing. The Unwritten Wing has an uneasy truce with the rest of Hell, whose denizens would gladly destroy all of its books to consume their creative energy and potential.

The problem for Claire isn’t just controlling her patrons, but also controlling her books. Unwritten books are restless, their pent-up authorial energy sparking and manifesting as characters brought to life. Claire’s job is to put these characters (and their books) back to sleep.

The intense and restless quiet of the Unwritten Wing is interrupted when Claire discovers that pages from the Devil’s Bible have been found. Written by Lucifer himself, the pages contain enough power that Hell and Heaven are both desperate to possess them. Claire wants the pages to prevent Hell from starting an all-out war that will destroy her library. Heaven wants them to call the Creator back from Her abandonment of their blessed realm.

Claire isn’t alone in her self-imposed mission to recover the pages. She’s accompanied by group of outcasts and misfits: Leto, a scared teenage demon; Hero, a character who refuses to return to his book; and Brevity, a failed Muse and assistant librarian. As they travel from afterlife (hello Valhalla!) to earth and back, they have to outsmart the forces of Heaven and confront their own complicated pasts, both of which threaten to derail their plans.

Hackwith has a tricky task to navigate as she opens her novel. The success of the story depends on readers having a solid understanding of the Unwritten Wing, its inhabitants, and its place in Hell. She also a story to get started. Luckily, she does both with aplomb. The narrative has a good sense of momentum, even as readers get to explore the Unwritten Wing. There’s a lot of heavy-lifting worldbuilding, but the world is so fun that it feels like a treat to see it all unfurl.

McGuffin-esque plots can fall into the trap of pushing characters from one step to the next simply because the story requires it. Hackwith is careful to make it feel like her characters aren’t just being swept along. Best of all, they don’t always make the decisions they should, which gives the novel some nice unexpected moments.

Vivid characters and an intriguing world make THE LIBRARY OF THE UNWRITTEN a great entry in the genre of books about books.

THE LIBRARY OF THE UNWRITTEN is very prose-forward (are novels like wine? IDK?) both for better and worse. Hackwith’s language is undeniably precise and beautiful, which I liked, but which I actually found to be a little distracting as I moved further into the story. It doesn’t stop the narrative momentum, but it does slow it slightly. However, I feel that the type of readers drawn to this type of novel will find her prose to be a selling point.

Hackwith writes vivid secondary characters who make up an interesting ensemble. Leto is absolutely tragic and sweet at the same time. His arc takes some dark and unexpected turns, which kept me guessing. I also thought Hero was a great character with a surprising arc.

And as for Hackwith’s protagonist? Claire is unyielding. She’s smart and tough and haunted. She’s prickly and not entirely likable, which I liked. Her character would have been stronger for me if Hackwith had given us more of Claire’s life before–why did she never write her books? What type of regrets sent her to be Hell’s librarian? She’s not a one-dimensional character by any means, but that background would have given her a dimension I felt like she was missing.

With fierce librarians and an ending that closed the arc of the story without closing the door on the world, THE LIBRARY OF THE UNWRITTEN will leave readers satisfied but still wanting more.