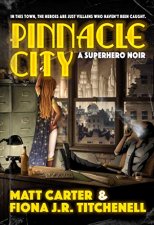 I am generally indifferent to superheroes. I actively dislike noir. Based purely on the title, this is a book I normally would have browsed past faster than a speeding bullet. It seems like a mash-up of superheroes and noir has the potential to be one big, self-important cliche.

Edgar (Eddie) Enriquez is the epitome of a noir detective: addicted, cynical, and from the wrong side of the tracks. Despite all this, he’s still got a strong sense of right and wrong. Recruited by a supervillain at a young age, Eddie served time in prison and then tried to redeem himself by joining the army. He got out with a wounded shoulder and an implant that makes his super power even more useful. Eddie can see the history of anything he touches. Where the object was, who had it, what was happening nearby–and now his implant allows him to record that history. It’s handy when he needs evidence in court and it helps keep him in business.

When Eddie meets Kimberly Kline, she’s just been promoted from the Justice Juniors to the big league: the Pinnacle City Guardians. She’s beautiful, polished, more powerful than just about any other superhero in the city, and also incredibly drunk. They have a one night stand that ends poorly when they realize who the other one is. Kimberly can’t afford mistakes, especially not the sleeping-with-former-henchman kind. And Eddie is practically allergic to professional heroes.

Kimberly’s first assignment as a Pinnacle City guardian is to protect the trumpian Mayor Card and his useless children. Eddie’s on assignment to find out who murdered a local philanthropist. Of course, neither of their jobs turns out to be that simple, and pretty soon they realize that the slick and shiny supers might be just as dirty as the gangsters they’re supposed to be putting away.

PINNACLE CITY embraces its own weirdness, which is a good thing. Characters with believable emotional arcs and solid worldbuilding propel the story forward.

Swinging from silly to horrifying, PINNACLE CITY hits some dark places. I wasn’t bothered by the tonal shifts, because nothing gets me down more than being relentlessly grim. If you’re a real grim-dark fan though, this may be too bubbly for you. The ending is nicely bittersweet, if perhaps a bit rushed.

While they could easily have gone with straight-outta-the-box characters, husband-and-wife writing team Carter and Titchenell give their characters some nice nuance. Kimberley and Eddie balance each other well. They each have believable personal arcs as they’re forced to reckon with their assumptions about the superhero community: Kimberly’s, that superheroes are actually heroic, and Eddie’s, that all superheroes are terrible. They have distinctive voices that make it easy to switch from POV. While there’s plenty of larger than life things they’re battling, their flaws and motivations keep their characters grounded.

One of the best decisions Carter and Titchenell made was to create a secondary world. We’re dealing with all-new superheroes and all-new powers. Pinnacle City itself is physically marred from years of giant killer robots and supervillain attacks. There’s gene-jobs and mutants and aliens all crammed into one teeming metropolis (I’m allowed to say teeming metropolis because of the genre I’m describing). I really liked that they pushed past just superheroes and thought about who else might populate this world. It keeps it entertaining.

PINNACLE CITY embraces its own weirdness, which is a good thing. Solid Characters with believable emotional arcs and good worldbuilding propel this unlikely story forward.