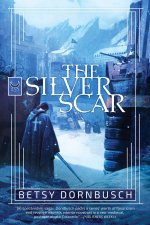 Betsy Dornbusch’s writing in THE SILVER SCAR (Amazon) is spare and lean, which gives the novel an immediacy that works in concert with her grim vision of a post-apocalyptic Colorado. While the book builds steadily, the beginning was rocky enough that I had a hard time getting into it and I bumped it down a ratings category or two.

In THE SILVER SCAR it’s the year 2170 and Bishop Marius has come to the Boulder Parish to lead a crusade. She claims that an angel smote her with a sword, leaving a silvery scar on her brow and a crusader’s mission in her heart. Trinidad, an Christian archwarden who was raised as a Wiccan, knows that Bishop Marius is lying. The only way she could have gotten that silvery scar is in a magical place called the Barrens where the sand heals any wound, leaving behind the distinctive marking.

Trinidad, who gave up witchcraft after being adopted by a Christian priest, hasn’t visited the Barrens in years, which means that someone else is working with Marius to transport her there and back. But the only person Trinidad knew who could rove to the barren is his former lover, Castile, who Trinidad believes to be dead. When his adoptive father is kidnapped, Trinidad finds himself outside the protective circle of the walls and the other archwardens. Discovering that Castile is still alive and desperate to stop the crusade, Trinidad struggles between the vows he has made to Christ and the truth that Castile shares with him.

Dornbusch doesn’t luxuriate in her own world-building and while the futurescape she suggests is compelling, many details that might have helped paint the world aren’t revealed until later in the book. Dornbusch gives tantalizing hints, but rushing past aspects of the culture or the city where we find our characters left everything a little blurry in my mind.

THE SILVER SCAR is an apocalypstic story about the struggle between the ideals of faith and confronting a living reality.

This inexorable push forward is especially confusing around the central reason for the crusade: The Barrens. While I am all for leaving a little mystery in a novel (and avoiding infodumps!) Dornsbusch gives her readers very little description of the Barrens and very few hints at an explanation for what it is, or how roving works. Magic can be just…magical, but I had fundamental questions about how any of the dreamscapes/roving worked and it felt frustrating instead of increasing the drama.

Dornbusch privileges plot strongly in her first few chapters, which can be a good hook. Characterization through action is such an effective writing technique (and really the only way to make sure that you don’t bore your readers to death) but Dornbusch isn’t quite a strong enough writer to pull this off. The action just feels confusing because it revolves around several alliances made and broken in quick succession. Readers haven’t had time to understand or care about the characters and so the back and forth lack emotional power or investment.

It was this confusion and lack of connection with characters that almost made me give up on this book during the first third. However, as the novel builds, Trinidiad and Castile’s relationship becomes increasingly compelling and so does Trinidad’s own struggle between the ideals of his faith and the lived reality that he confronts. Castile’s journey is particularly difficult to read as he is tortured and raped for his role in unfolding events, but his character is a good foil for Trinidad’s and his personality lightens the grimness.

There are enough issues with the book that I wouldn’t give it a full-hearted recommendation, but if you’re feeling like you need a little apocalypse in your life, you might give THE SILVER SCAR a try.