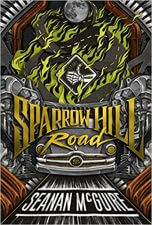 Most of you should remember my post from a few weeks ago. One, two, three, four… okay, well, seven IS more than a few, I’ll grant you that. Anyhow, my post was about Seanan McGuire’s book being uploaded to one of those free download websites before it had even been released. If not, you can go read it. (EBR Post). Hearing about what happened really bothered me. Like, a lot. At the end of my short rant, I said I’d pre-ordered the book and would be following up with a review of it. Well, the book that got hijacked was the second book in the series. So, I bought the first as well, and this is the review for that one. The next is still in the works though and will be coming soon.

SPARROW HILL ROAD (Amazon) is the first in the Sparrow Hill Road Ghost Stories series, and I’m actually pretty happy that I got a chance to read it, if not the route by which I became acquainted with it. Seanan McGuire is one of those authors that I’ve found has always put out pretty solid stories. I haven’t yet found one that totally wowed me… but this one actually got pretty close. I teetered on the line of a Books We Love rating and the Books We Like rating, which is what I eventually assigned it. The actual deciding factor for me was that I read the Jim Butcher anthology (EBR Review) immediately after this one and realized what a large difference there was between it and this one. That being said, this was still a really entertaining book, and still landed solidly in the realm that I expect to find any time that I read something from her.

Rose Marshall is sixteen. She’s been sixteen since 1952, when, while out driving around trying to find her missing boyfriend on prom night, she was run off the road and killed by a man that had sold his soul for the chance to live forever. Somehow she got away from him that night, and he wasn’t able to feed her to his demon car. Now, she’s been named a ghost of the highway, a hitchhiking ghost girl, and she wanders from her to there, across the country and back, watching for those that are close to dying and trying to help them make their final transition.

There are parts of her story that are a little odd. Like the fact that she can become corporeal if someone gives her their jacket, and she can only eat if someone offers her some food. Other parts of her story are pretty typical. Hitchhiking girl out on the highway needing a ride, and who wouldn’t think that a little… physical recompense might come into the picture occasionally. These details are laid out in the pages of the story as Rose moves through the real world and the multi-hued shadow world of Twilight that rests beneath it. There are real people and immortal gods; fearsome creatures and sentient roadways; witches and fae and any number of other wicked additions to the world that surround we mere mortals, for the most part unaffected and unseen. Not to mention soul-eating cars and the hell-bound psychos that drive them.

The book is broken up into short-story-like chapters that each tell a portion of Rose’s story. Overall, the writing is great. One of the most important aspects of ghost stories, for me, is atmosphere, and in that regard she hits the nail on the head in so many different ways. The world itself feels very real and full, and Rose’s drive to find those that are about to die and help them transition into the afterlife makes her a very sympathetic character. My brain kept trying to make a connection between her and Miram Black (EBR Archive) because of the similarity between the two characters and their desires to directly affect those that find themselves in the narrow transition point between life and death. But their individual stories are so completely different from one another that the comparison ultimately failed to connect for me.

SPARROW HILL ROAD is sure to delight and entertain those looking for a good read. Great characterization, solid world-building, and a whole lot of fun.

Originally, this book was a series of twelve short stories published in The Edge of Propinquity, an online semiprozine that ran from 2006 to 2011. A few years after they closed down, the rights were sold to DAW, and after some editing, those stories became SPARROW HILL ROAD. The reason I include these details is that the biggest issue I had with the book was that there wasn’t something more than Rose herself that tightly-bound the individual “stories” into a cohesive whole. They each seemed a little too… disparate to really be able to come together and knock one out of the park, so to speak. Expressly because of that fact though, I’m finding myself just that little bit more excited to read the sequel, GIRL IN THE GREEN SILK DRESS (Amazon) because that one will be all new material and have a greater ability to become more than just the sum of it’s constituent parts. Also, this one was sooooo close to my Love mark, that I can’t help but expect that the sequel will be the one that finally gets me there.

Of the two main themes of the book–love and revenge–I was ridiculously satisfied with the way one of them was brought to a close, and mildly let down by the other. I’ll leave it to you to read the book and decide for yourself which might have been which.