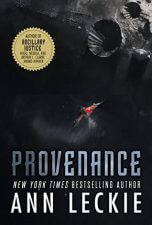 Ann Leckie’s PROVENANCE (Amazon) is not a space opera. While the scope is broad, covering an uneasy interstellar treaty and the implications of a society obsessed with origins and authenticity, the real focus is on Ingray Aughskold, a foster child from a public crèche, acutely aware that in her mother’s eyes, she has always lacked “a certain something” (423). PROVENANCE plays out on an intimate scale, the coming-of-age story of a woman who should have come into her own years ago.

The reader meets Ingray Aughskold just as her latest plan to gain her foster mother’s approval falls apart. In a society where prestige and power are handed down by taking on a parent’s name, Ingray knows that it’s likely her brother will be the next Netano Aughskold. Despite her certainty, she tries one last, desperate time to gain Netano’s favor by embarrassing a rival political family. Having spent all of her money to retrieve the Pahlad Budrakim from ‘Compassionate Removal,’ Ingray is dismayed to find that the person she awakens from suspension flatly denies being Pahlad and refuses to help with her scheme–a turn of events with an inconvenient criminal companion in tow as she returns, penniless, to her home planet of Hwae.

The captain of Ingray’s ship, Tic Uisine, has problems of his own.The ambassador of the the Geck (an alien race) has accused Tic of stealing Geck ships, a claim that he firmly denies, but which does not stop the ambassador from following Tic, Ingray, and not-Pahlad all the way to Hwae.

Other complications appear as soon as Ingray arrives at Hwae, complications that make Ingray’s original problem–her penniless state and not-Pahlad’s lack of cooperation–recede almost immediately. A straightforward accounting of the plot might seem disjointed, but only because much of Leckie’s work in PROVENANCE has been to tie seemingly disparate events into a neat web, the shape of which only reveals itself as the novel progresses. Each new problem gives perspective on the former one, and with each twist and turn the stakes are raised, until Ingray’s personal misfortunes become part of an inter-system military dispute. And yet, because of the tight, single POV on Ingray, the plot feels like an interesting backdrop which Ingray’s self-discovery can play against.

Ann Leckie's PROVENANCE is less of a space opera and more of a coming of age story. That doesn't mean there aren't big stakes though. Lots to enjoy here.

While the novel focuses on Ingray, Tic Uisine and Pahlad’s narratives are also about discovering and acting on individual desires while resisting the immense pressure of family, politics, and history. Although Tic Uisine and Pahlad grew up a galaxy apart, they have both been exiled by their respective societies and must each forge new pathways for themselves. While Ingray’s situation is less extreme, her friends’ stories drive Ingray to interrogate her own motives as she decides what being the next Netano Aughskold is worth to her.

Leckie is an assured writer and her prose is at once both clear and evocative. The clarity of her prose makes it tempting to say that it’s simple, but I think that only Leckie’s considerable skill makes the complexity of her prose read as simplicity. Even then, the reader may find themselves occasionally re-reading passages, as Leckie has managed to include not only complexity but also a fair amount of information in her work. However, for readers who felt that ANCILLARY JUSTICE (or Leckie’s other books) may have moved a little slowly, PROVENANCE keeps up a good pace and Ingray’s story is compelling enough to keep pages turning.

Because of the single POV, the main conflicts come into view slowly, which did feel a little disorienting at times. I kept wondering if I had missed a specific piece of information, only to realize later that Ingray lacked that piece of information, as well. This is not a flaw in the book so much as a call for careful reading. Aside from the main plot, Tic Uisine’s subplot about his complicated relationship with the Geck became a highlight of the book for me.

For those who may have visited Radchaai space a long time ago, or for those who missed ANCILLARY JUSTICE entirely, PROVENANCE does not require any prior knowledge of Leckie’s universe. With an ending that left me genuinely pleased for each of the characters, it’s a satisfying and interesting introduction to her writing.