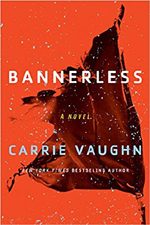 From the cover: “Decades after economic and environmental collapse destroys much of civilization in the United States, the Coast Road region isn’t just surviving but thriving by some accounts, building something new on the ruins of what came before. A culture of population control has developed in which people, organized into households, must earn the children they bear by proving they can take care of them, with symbolic banners awarded to demonstrate this privilege. In the meantime, birth control is mandatory.”

Our main character, Enid, is from the community called Haven, and works as an investigator–she mediates disputes and investigates offenses against those living along the Coast Road. In her mid-twenties, she’s considered young for the job, and her first big case is to investigate the suspicious death of a young man treated as an outcast.

Strangely enough, in the post-apocalypse life murder is rare. Strict controls of being able to prove your worth as a contributing member of the community means people are focused on surviving and earning the right to have offspring. While for the most part this concept works, too many chafe at the restriction, hence the need for investigators.

Enid and her enforcer Tomas arrive in Pasadan with a strange reception. The community council has to request an investigation, but there’s obviously dissent among the council leaders and Enid has to deal with obstructive behavior. It doesn’t help, either, that the man murdered didn’t much get along with the community, the people believing him to be “bannerless,” or that he was born without sanction. It isn’t fair to him, but there it is. But there’s more going on in Pasadan than a suspicious death, and Enid begins to wonder if there isn’t another reason she was called to investigate the community.

BANNERLESS is a "what if" post-apocalypse scenario. What if there was birth control after the world died? How then could you protect society?

BANNERLESS is an exploration of a “what if” post-apocalypse scenario. What if there was birth control after the world died? How could you protect society if they agreed on certain rules? Only accepted communities can trade with each other, with some communities having specialized skills and resources; those unwilling to accept community restrictions are left  on their own and often suffer hunger and worse as a result. As the mystery is unraveled, we learn more and more about life after the Fall. Some of this is explored during a parallel story Enid tells about her teenage years when she takes up with a traveling musician and as a result sees more of the world around her than she would have living in Haven. Some communities do better than others, depending on leadership or the ability of the people to work with what they have. And it’s a world that now suffers from increasingly destructive weather which makes the struggle worse. However, not everything is as idyllic as it appears on the surface.

Told from Enid’s PoV, we come to appreciate her ability to communicate with people, understand their underlying motivations, and deal with her own frustrations at the same time. She sees in Tomas a father-figure (her own father is absent), and relies on his serene good sense. Most other characters are two-dimensional, but that’s the pitfall of a large-cast mystery told from one PoV. I’s Enid’s ability to see people for who they really are that helps her solve the issues she must deal with as an investigator. But her insight also helps her see the small tears in the fabric of the communities that risk its health, and it’s that question that makes her wonder at the future viability of the Coast Road.

I’m not a superfan of dystopian novels, and so I didn’t expect to get sucked into BANNERLESS like I did. I read it quick, Vaughn’s writing carries the story along without cluttering it up with flashy prose or boring characters. It’s the first of a series, and I’d be interested in seeing where she takes this world and the characters.