Review: Arm of the Sphinx 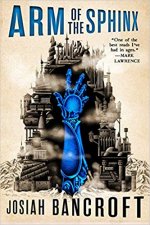 Early in my author-hopeful career, I attended a meeting for a local writer’s group where a middle-aged woman gave a presentation about writing character. Somewhere in the middle, she made a statement along the lines of, “If you want to change your point-of-view-character in the middle of a chapter, you must do it very carefully.” She then read an excerpt from a book she’d written that contained just such a change in point of view. When she’d finished reading from her book, I admit that I was completely flummoxed, as I didn’t understand at all how she’d been “careful” during the point of view shift. At the time, I was considerably too timid to raise my hand and tell her that she’d done it wrong and that, in fact, there was no correct way to do such a thing and not risk losing your reader’s attention. These days I highly doubt I’d be quite so demure.

ARM OF THE SPHINX (Amazon) is the second in the Books of Babel series by Josiah Bancroft, and is a continuation of the story that I came across while wandering through he fallout of the 2016 SPFBO hosted by Mark Lawrence. I bought the books on Mark Lawrence’s suggestion, reviewed the first one, and now find myself here.

This book picks up fairly quickly from where SENLIN ASCENDS left off. Tom Senlin, now going by the moniker Captain Tom Mudd, and his crew are searching for a way to get into the ringdom where Tom’s wife is being held, but they aren’t having any luck. As such, they’ve begun trying their hand at “gentlemanly piracy” (I laughed quite a bit over this notion), but are not having much luck at that either. Then, a contact within the single port of the tower that will still provide them a temporary berth leads to a single possibility: a ringdom that has long been sealed in the rock of the tower. Still he must try, and in so doing finds a man that seems to be organizing and leading the hods, or slaves, of the tower. And Tom believes it through the hod tunnels that Tom Senlin may yet find a path to his wife. But if he does, then the Sphinx will be sure to have a hand (arm?) in it.

I was really looking forward to getting into this book as soon as I finished SENLIN ASCENDS. That book was so much fun, and brilliantly written, and so different than so much of the other fantasy out on the market today. As I dove into ARM, I found the prose and pacing to be very similar to the first. Rich description that doesn’t get in the way of the story and enhances every aspect of it to the fullest extent. Constant movement in the plot and pacing, development of our several characters in the best ways possible. The author is one that just understands how to relay character and emotion, despite the fact that this is only his second (self-)published book. (Dang all these parentheses. Vanessa is going to get after me again…)

ARM OF THE SPHINX is a fun, engaging story that continues the story of Tom Senlin while he seeks to be reunited with his wife.

There were two aspects of the novel, however, that significantly detracted from the goodness of the book. The first you might have already guessed: point of view. Instead of the focused, driven, single (overwhelmingly) perspective of Tom Senlin we got in SENLIN ASCENDS, nearly every secondary character that calls Tom a friend got POV time, and there were even a few others that never even met the man. The main difficulty with this is that none of these various characters had anywhere near the motivation, drive, or persona of Tom Senlin, and so this diluted the story significantly. Additionally, there were egregious examples of head-jumping, which I just can’t abide. The fact that there was so much head-jumping, and the fact that I gave this book a “Books We Like” rating, should tell you just how impressive the book otherwise is. By the time I got to the end I was actually somewhat surprised at just how much I had enjoyed it because of this very issue.

The second issue that really made me lose some of my steam for the book was the ending. With the title of the book being “Arm of the Sphinx” I fully expected that Edith would be a focus of the story, and she was. In my opinion, her POV was the only one that was justified though, and she should have gotten considerably more attention in the story. All of the others but Tom could have been removed, and it would have made the books much the better. With all the resulting dilution of the story, however, the ending really kind of fizzled for me, and it ended up feeling very much like the second book in a trilogy, or more directly: a setup novel for the final book. Granted, it was only the ending that made me feel this way. So much of the adventure of the entire book was exactly what I’d been looking for. With a lot more focus and energy, this book could have been just as good as its predecessor.

A fun, engaging story that continues the story of Tom Senlin while he seeks to be reunited with his wife. A good entry, suffering only from what one might call some very simple newbie mistakes. Keep writing Mr. Bancroft. You’re going to be one of the good ones.