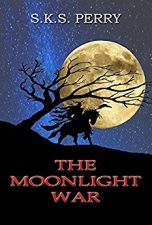 Actually, it’s more complicated than that. The powerful Lord Myobi has decided–for reasons known only to him–to travel to a neighboring city, despite knowing that the most recent caravans have disappeared. When local merchants, desperate to reach said city with their goods, decide to join Myboi in the hopes that his elite entourage would provide the protection they need, he decides to ask the king for a caravan leader and escort. The king provides his niece, the princess Setanna, who takes charge, and must hire on cooks, muscle, and wrangle the groups into a semblance of order.

One of the local religious leaders seems to really care about the outcome and influences the king to make sure certain people go. To help weed out those who would only drag things down is the seer Malaki, who despite her tender age of fifteen, is able to see into the future, which is desperately needed for an endeavor such as this.

In attendance for the sake of making a quick buck is Roc, the (pathetically failed) highwayman, who’s been stripped of titles and lands, so must find a way to pay for the next meal; fortunately his cavalry skills makes him a natural choice. Kieran, the farm boy with impressive sword skills. Conner, the weapons master of a local merchant lord, who’s sent to escort the lord’s son to the city to meet his bride. And Tasha, the ninja who’s more outcast than hero. And there are others–this story is all about the motley crew assembled and their interactions with each other. Fortunately it isn’t too hard to keep track of all these people, Perry does a good job making them recognizable and that they have an important part to play in the story.

The novel’s set up is pretty simple, the plot straightforward.  The progression mostly predictable, such as the disappearance of the random caravan guy; then there’s an attack and someone almost dies. They don’t know what’s going on. Eventually Tasha informs them that he thinks they’re being attacked by Ukhami, the result of a long-ago war against the horde, when magic was used to make men into unstoppable warrior beasts. There used to be a way to control them, but the artefact is long missing. In essence they’re all doomed. Except, of course, there’s more to the story than that.

A ninja, a highwayman, a witch, and a princess decide to join a merchant caravan across terrain known to have killed experienced soldiers... where to go now

The world itself is your standard Renaissance-era fare. What makes it Fantasy is the magic. It gets a little frustrating with how slowly we learn about the magic, who has it, why it isn’t used more, what it is used for, how it works, and etc. It’s important to know these things because it matters to how we understand the origins of the Ukhami and the magic that controls them. Compared to most of the other Blog-Off books Perry spends much more time on the characters than he does on world building (see our recent diatribe on Balanced Storytelling). The benefit is that infodumping is kept to a minimum; there are a few annoying flashbacks, but fortunately they aren’t too long or boring. And he stretches out the revelations with a keen eye for plot tension without frustrating the reader (the magic details are another story).

I didn’t give TMW a very high rating for the Blog-Off, but that’s not because I didn’t like the book. It was fun to read, the story moves forward at a good clip, and the characters were enough of a twist on the usual clichés that they didn’t bore me. It’s easy to see the book’s potential. It’s obvious that Perry has a healthy imagination and a good handle on the movement of the characters within the story and the kind of people they are.

My main problem is simply that this book could have used an editor with a professional eye. There isn’t necessarily one big problem with the book, it was a bunch of little things, and together they unfortunately bring it down. For example, the contrivances, and there are plenty. An editor could have helped with certain scenes and behaviors to help readers find these situations believable. The opening scene is a big example of this. Perry tries to help me understand why a fight is inevitable, but I still found it contrived, and I almost put down the book as a result. Other contrivances include the plethora of romantic pair-ups in the story; most of them felt forced and awkward, and I usually love these kinds of thrown-together love stories.

Beyond the issues of believability, there’s also problems with occasional PoV issues (not always strict, despite well-done movement from scene to scene). There were numerous copyediting issues. There are several unexplained questions (that unfortunately would contain spoilers) that result in plot holes, but I’m sure could be easily fixed. One of the strangest parts of the novel for me was, and I’m not sure if this is a style issue, was the awkward nerdy writing that often threw me out of the story. Perhaps it’s more a lack of subtlety than anything which makes for amateurish writing. Like the really strange humor involved in Roc’s failed highwayman scene and the post-commentary. Sometimes how characters refer to how others see them, which is a noob technique at characterization. There are better ways to do these things that simply needs an experienced editor to smooth them out.

Despite occasional hiccups with with flow and pacing, Perry builds up the story well enough that the battles at the end really begin to matter, and the things they learn as a result lead to a satisfying ending. Well…one that leads into a sequel anyway. It should be interesting to see what Perry does next.