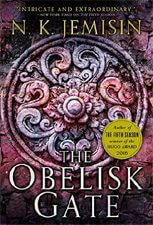 We first met Essun in THE FIFTH SEASON, as she discovers that her husband has murdered their son and kidnapped their daughter. Of course Essun must follow, because her daughter Nassun is a magic-wielding orogene like her mother–and that was the reason her husband killed their son in the first place.

If you haven’t read the first book, there are all sorts of revelations I’ll be talking about here, so you may want to spare yourself spoilers. THE FIFTH SEASON (EBR review) is worth reading, and I don’t think THE OBELISK GATE will make much sense unless you do. You’ve been warned.

So when we left off FIFTH, we’d learned Essun’s backstory, why her husband killed her son and took off with their daughter, and enough about the culture and orogengy to understand it’s significance. OBELISK takes everything we’ve learned and builds on it in devastating and enlightening ways as Essun comes to understand what’s really going on:

That Alabaster caused the rift and the start of the Season in order to start the chain of events that could mean the end of Earth’s hatred of the humans that populate it.

Essun spends the book in Castrima, a community in a geode under the ground, where they’ve stored food and supplies to wait out the Season. The amazing thing is that it’s run by an orogene, Ykka. It’s hard for Essun to believe it’s possible for regular people to accept a magic-user’s leadership until she learns that Castrima can only run on the power of an orogene’s magic. It was Ykka’s magic that drew other orogenes to her, including Essun and Alabaster. Essun is glad to see her old mentor, but ultimately learns what he did and the consequences of using so much magic, as he slowly dies as his magic use turns his body to rock.

But Alabaster has sought out Essun for a reason, and is using the remaining days of his life teaching and preparing her to finish the monumental task he started: to return the moon to Earth’s orbit.

Jemisin has created a world that is on the verge of breaking, and populated it with a varied people and cultures. But what really makes this story engaging are its characters and its magic. The result of a world constantly in upheaval means that over the years knowledge is found and lost, so Alabaster and Essun have to re-learn the vital information they need to stop the Seasons altogether, a concept unthinkable to others. We learn more about the stone eaters and their strange connection to orogenes. We learn more about Guardians, what they are, and why they do what they do. We learn about the obelisks, what they are, why they exist, and how Essun can use them. We begin to understand the difference and connections between orogeny and magic. We still have so much to learn in the sequel to OBELISK, but Jemisin has teased me with enough juicy details that I can’t wait to see the strange and wonderful she has waiting for me.

Essun and Alabaster continue to be a complicated pair. Here we learn more about the stone eater Hoa, who follows around Essun and what he’s capable of. There’s the clever politician Ykka, the eccentric scientist Tonkee, and steady doctor Lerna–only three of a cast that is interesting. The most interesting, however, is Essun’s daughter Nassun, who has spent the past year following her father across the continent to find the community where he’s heard orogenes can be cured of their magic; instead, Nassun’s powers grow as she teaches herself to see the magic that flows all around her.

As far as middle-of-the-series books go, OBELISK is a well-done continuation of the series story without bogging down the overarching series.

As great as the magic and characters are, I’m still not completely clear on a few things, such as alliances (especially the Guardians), motives (like the stone eaters), and what exactly happened to the Guardians and why. While I appreciate subtly, Jemisin in a little too subtle with a few things. She does well teaching us important information as we go without infodumping, but in a few ways she holds back too tightly. Another thing that bothered me was the PoV switching between second and third person, there are sections where it wasn’t clear who’s talking–the author makes me work too hard to understand what’s going on.

Ultimately, though, OBELISK is a worthy sequel to FIFTH, and as far as middle-of-the-series books go, is a well done continuation of the story without bogging down the overarching series. I’m looking forward to the sequel.