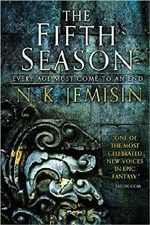 The Stillness is a world of magic, where the power of the earth is used to create but also destroy and kill. Those who can wield earth magic are called orogenes, and when we first start THE FIFTH SEASON by N.K. Jemisin we are introduced to one orogene in particular: Essun, a woman hiding in plain sight.

You see, orogenes are held in suspicion by the normal people of The Stillness, and for obvious reasons: they can use the earth as a weapon. For this reason all orogenes are sent to Yumenes, the capital city, where they attend the Fulcrum and learn to harness their powers, but most of all how to control it. Because any orogene who can’t control themselves or their power cannot be suffered to live.

Back to Essun, who lives a quiet life in a remote village, with her husband, two small children, and a past full of pain. A past that catches up with her just as the world begins to end.

Just kidding. It’s not really ending. The people of The Stillness can be a little dramatic sometimes. It’s what’s called a Season, when the earth breaks and a period of chaos ensues. The thing is the people never really know how long a season will last: a few months, a few years, a few decades…or more. Life revolves around preparing for such an unpredicatble event–the only predictability is that it will happen. So when a rift opens and Essun’s village remains undamaged, the only explanation is that an orogene lived there, the question was who. Essun’s husband guesses it to be their son, kills him, and leaves with their daughter. Essun’s only choice is to hunt him down before he murders their daughter, too.

Readers will also learn about Damaya, the child who is found by a Fulcrum Guardian and taken to be trained; and is also ruthlessly taught what it means when an orogene doesn’t obey or keep their control. And Syenite, a four-ring Fulcrum graduate sent on a mission with a ten-ringer (Alabaster) as a mentor to clear a coral reef off a coastal city; and is ordered to bear his child with the hopes the child will inherit the father’s magical strength.

If you read Jemisin’s fascinating THE HUNDRED THOUSAND KINGDOMS (EBR review), then THE FIFTH SEASON is for you. Her finesse with the plot is much improved, the minor problems I had with THTK nowhere in sight. Jemisin plays with the story format here, opening with an almost cheeky narrative prologue introducing us to the landscape and the main characters and their back story. This could have turned out badly, considering how much of it was an infodump. But her style is so easy to read, clever and uniquely descriptive.

The characters are complex, flawed, and easy to visualize. Syenite’s story in particular is fascinating as she travels with Alabaster and discovers the lengths the Fulcrum will go in order to keep The Stillness stable. She struggles with her ingrained training to obey the Fulcrum and Alabaster’s questioning of their motives of whether or not the Fulcrum’s rules are necessary. And  she struggles with the things she witnesses with her own eyes. Essun’s story is told from second person–a PoV narrative style I usually hate and can’t take more than ten pages of. Yet here, oddly enough, it works.

The Stillness is a world of magic where the Earth's power are used to create and to destroy. THE FIFTH SEASON is a good read that will stick with me.

The Stillness is a character and story all its own. It’s a land of constant upheaval, almost as though it’s trying to wipe out humanity. Jemisin describes the populace in a way that’s easy to visualize and remember–all without feeling like I’m being bashed over the head with its myriad races and cultures. There’s enough new verbage to make the land and culture feel foreign and unique without a frustrating learning curve (some of it is a little forced, but I went with it). She weaves the world-building within the story and the characterization in a way that I would sometimes read a later chapter that throws a previous chapter in a whole new light. I don’t think I’ve ever read a book that’s done that to me before.

I suspect I’m going to be thinking about this book for a while to come. Despite an ending that points to an obvious sequel, I had enough questions answered that I wasn’t bothered with the questions that weren’t–and look forward to having them answered in the next installment.